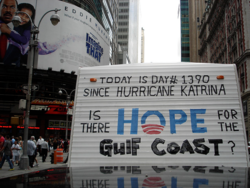 President Obama plans to be in New Orleans on Aug. 29 to commemorate the fifth anniversary of Hurricane Katrina -- a prime opportunity to put disaster recovery issues back atop the national agenda.

Obama is scheduled to deliver a speech at Xavier University, the nation's only historically black Roman Catholic institution of higher learning. Weeks before Katrina's first anniversary, then-U.S. Sen. Obama delivered a commencement address to the school's first graduating class in the disaster's wake.

The president's trip is being hailed across the Gulf, where a recent Kaiser Family Foundation poll found that a majority of New Orleanians fear the rest of the country has forgotten about the challenges they still face. In an Aug. 17 editorial, the New Orleans Times-Picayune noted that the visit is important both symbolically and practically:


The presence of the president will draw the nation's attention to our ongoing recovery and remind Americans of the lives lost in this tragedy. As he said during a stop here when he was running for president: "The words 'never again' -- spoken so often in those weeks after Katrina -- must not fade to a whisper."

Meanwhile, human rights advocates in the region see the President's visit as an opportunity  to highlight an issue of growing concern: the administration's failure to implement a human rights-based recovery standard for disasters.

The federal framework for disaster response and recovery is currently set forth under the Stafford Act, which has been widely criticized by governmental officials and non-governmental organizations as ineffective for addressing catastrophic disasters like Katrina. At the same time, the law fails to incorporate the standards embodied in the Guiding Principles -- and in some instances directly conflicts with them.

For example, while the Guiding Principles give national governments primary responsibility for providing protection and humanitarian assistance to people displaced by disaster, the Stafford Act assigns responsibility for disaster recovery to states while limiting the national government's role to functions designated as federal under the U.S. Constitution or law. All other federal actions are considered discretionary and thus are immune from lawsuits.

Numerous nongovernmental organizations working in the Gulf region have called on the Obama administration to implement [pdf] the Guiding Principles. They include the ACLU of Mississippi, the Center for Constitutional Rights, the Louisiana Justice Institute and the Mississippi NAACP.

Meanwhile, Monique Harden and Nathalie Walker -- attorneys with Advocates for Environmental Human Rights, a nonprofit public-interest law firm in New Orleans -- argue that the BP disaster makes it even more imperative to bring U.S. disaster law in line with international human rights standards. In a recent op-ed, they noted that the $20 billion recovery fund created by BP is run under the discretion of Obama appointee Kenneth Feinberg -- and they explained why that's problematic:

The Obama administration is continuing down the path of setting up discretionary programs to address major disasters by appointing one person to determine what recovery will be for the people and the environment harmed by the BP oil drilling catastrophe. Suppose that today Mr. Feinberg exercised his discretionary authority to create a recovery program that made everyone happy. What would happen if he resigned tomorrow? Someone else appointed to the position could exercise his discretion to replace Mr. Feinberg's recovery program with entirely new terms and conditions.

Harden and Walker point out that the Oil Pollution Act, which governs spills like BP's, essentially establishes the full right to recovery by creating exceptions to the liability cap that include gross negligence as well as violations of federal safety, construction or operating regulations. They urge President Obama to affirm that there is no liability limit for BP because of its bad actions leading up to and following the Deepwater Horizon disaster. They also call on him to go one step further:

It is time that the Obama administration eschews discretionary approaches to Hurricane Katrina, subsequent storms, and the BP oil drilling disaster. To do anything less dooms our communities in the Gulf Region to continued destabilization and a degraded environment, all of which undermine our basic human rights.

AEHR and other advocacy groups have made headway in getting the Obama White House to at least acknowledge that it has human rights responsibilities at home. In January 2010, administration representatives traveled to New Orleans for a groundbreaking consultation with nongovernmental organizations about human rights. The visit was co-sponsored by the Gulf States Human Rights Working Group, which AEHR is a part of, as well as the Equity and Inclusion Campaign, the Greater New Orleans Organizers' Roundtable and the U.S. Human Rights Network. The administration is scheduled to submit its human rights report to the U.N. this coming November.

Could a sea change be coming in how the U.S. government approaches disasters? It will be telling to see whether President Obama uses the language of human rights when he visits New Orleans this month.

As Obama noted in his 2006 address at Xavier, "...[L]essons can be just as easily unlearned as they are learned. Time may heal, but it can also cloud the memory and remove us further from that initial core of concern."

(For more on Katrina and human rights, see the Institute for Southern Studies' January 2008 report, "Hurricane Katrina and the Guiding Principles on Internal Displacement: A Global Human Rights Perspective on a National Disaster." Photo above from the KatrinaRitaVille Express.)