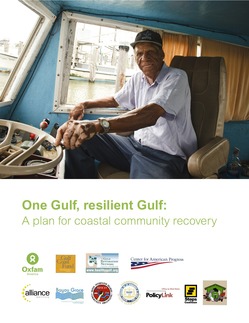 A coalition of more than 100 organizations from across the U.S. and Gulf Coast released a report yesterday that offers a plan for the long-term recovery of the region affected by the BP oil spill disaster.

"One Gulf, resilient Gulf: A plan for coastal community recovery" calls on the federal government to develop a Gulf Coast Community Resiliency Task Force and a Gulf Coast Community Resiliency Fund. The task force would administer the fund by investing in projects throughout the disaster-affected region with the aim of developing a new economy based on ecosystem restoration, adaptive technologies, clean energy and energy efficiency.

"Gulf Coast citizens and community advocacy groups are more than just resilient, we are visionary," says Derrick Evans, adviser to the Gulf Coast Fund for Community Renewal and Ecological Health and founder of the Turkey Creek Community Initiatives in Mississippi, both of which helped develop the plan. "After the hurricanes of 2005 and 2008, and the BP Deepwater Horizon Disaster, we heed President Obama's call to forge local experience and community wisdom into recommendations for the administration's regional recovery plan."

It's been estimated that the Gulf oil disaster could lead to the loss of as many as 100,000 jobs. To address that problem, the plan would create a citizen stakeholders committee in each of the five Gulf states -- Alabama, Florida, Louisiana, Mississippi and Texas -- through a process facilitated by the U.S. Environmental Protection Agency. Each state's committee would include one representative from each of five stakeholder classes: commercial fishers; socially vulnerable communities; indigenous communities; conservationists; and tourism, hotel, restaurant and small-business operators.

The membership of each committee would elect a chair and vice chair to serve on the Gulf Coast Community Resiliency Task Force, which would also include representatives of relevant federal agencies and the governors of the Gulf Coast states. The task force would prioritize proposed projects and move them toward contracting and implementation. The plan also includes the creation of regional stakeholder bodies with representatives from fisheries, local government, development agencies, civic and faith-based groups and others; in turn these regional bodies would implement approved community-based grants, provide oversight of projects and develop recommendations for new projects.

As a first step for funding of the plan, the report calls on the Obama administration and Congress to enact reforms to the federal Oil Pollution Act to create the Gulf Coast Community Resiliency Fund within the existing Oil Spill Liability Trust Fund. The resiliency fund would also include funds generated from fines assessed for Water Pollution Control Act violations related to the BP disaster. The report also calls for a substantial portion of the proposed tax increase on oil now slated to go to the Oil Spill Liability Trust Fund to be directed to the proposed resiliency fund.

To provide another source of monies for the resiliency fund, the report calls on Congress to eliminate tax loopholes for the oil and gas industry. For example, it estimates that retroactively eliminating tax deductions on federal fines and other liabilities for oil spills could generate more than $10 billion.

"First with Katrina and now with the BP oil spill, the recovery of the Gulf Coast has depended far too much on the resiliency of individuals and families in the region," said Raymond C. Offenheiser, president of Oxfam America. "Alongside community resolve to build back stronger, what is needed are appropriate private and public investments that reduce the vulnerability and create a roadmap to recovery."