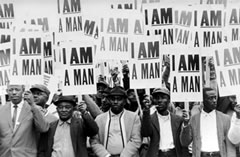 When Glenn Beck decided to hold his "Restoring Honor" rally last week at the very site in Washington, D.C. where Martin Luther King, Jr. delivered his "I Have a Dream" speech, the Fox commentator's dubious attempt to draw parallels between his right-wing agenda and King's quite different vision was blasted by civil rights veterans.

But Beck seems to have missed another flaw in the comparison: The 1963 "March for Jobs and Freedom" that Dr. King addressed was sparked by the labor movement -- specifically A. Phillip Randolph and the Brotherhood of Sleeping Car Porters, who formed a crucial backbone to the civil rights struggle in the South.

Randolph and Brotherhood leaders like Alabama's E.D. Nixon, who was instrumental in launching the Montgomery Bus Boycott that propelled King onto the national stage, would find little to agree with in Beck's anti-labor agenda. When the Employee Free Choice Act was up for debate last year, Beck's show equated it with (surprise) tyranny and socialism; Beck even mused that if he turned up dead, "check the unions."

But Beck's bungling attempts to white-out civil rights and labor history reveal a deeper truth: That King's and the Brotherhood's agenda of protecting workers' rights and promoting a fair economy is under attack.

This week, the human rights group Freedom House released The Global State of Workers' Rights, a report sizing up labor rights world-wide. The conclusion: "One-third of the global population lives in societies in which workers' rights suffer a significant degree of repression."

But another finding was even more striking: The United States, far from being a human rights leader, lags behind 30 other nations [pdf] in its labor protections. In the Americas alone, the Bahamas, Barbados, Belize, Canada, Chile and Uruguay all rank higher.

Why the low ratings? Because "the ability of workers to join trade unions and engage in
collective bargaining" has been chipped away by policy and court decisions, largely due to anti-union sentiment in the South during the New Deal, as noted in the Freedom House report [pdf]:


The Southern states were more hostile to unions, however, and after Congress adopted
the Taft-Hartley Act in 1947, giving states the authority to pass so-called right-to-work laws, the measures were quickly enacted in nearly all of the states in the South. The laws prohibit unions from making membership or payment of dues a condition of employment, either before or after a worker is hired; today, 22 states have some form of right-to-work provision in their labor codes.The laws have had a profound effect on the labor movement's ability to organize workers on a truly nationwide basis, restricting union growth across the South and the Sun Belt region.

Without unions to advocate for their interests, Freedom House finds that U.S. workers -- especially in the South -- face greater intimidation and retaliation from their employers, including threats to fire employees or close down plants if workers attempt to organize.

The threats to labor rights in the South also have a direct impact on the bottom line of working families. Nationally, workers in unions earn about 27% more than their non-union counterparts. While 81% of union workers have health care, only 50% of those without unions do. And 72% of unionized employees have a guaranteed pension, compared to only 15% of those without.

And contrary to the business-funded "research" that flooded the media during the Employee Free Choice Act debate last year, unions aren't a drag on the economy. A new study by Hofstra statistician Lonnie Stevans found that there was virtually no difference in employment rates and business investment when comparing states with and without "right to work" laws.

But Stevans did find some key differences: States with "right to work" laws do have lower wages and per-capita income, and the income of business owners is higher. Indeed, nine of the 10 states with the lowest median income are in the South.

Turning around the South's anti-union climate and ensuring the rights of the region's workers are protected won't be easy. Groups like the U.S. Chamber of Commerce, in part emboldened by their leadership in derailing the Employee Free Choice Act last year, have expanded their political presence, already sinking $75 million into campaigns for the 2010 elections.

To counter this growing imbalance between labor and management, unions will have to redouble their efforts in the South, investing more time, energy and dollars into recruiting new members and fending off business counter-efforts. It's a tough sell in the national union offices: With labor embattled nationally, labor leaders are reluctant to sink resources into Southern states that have been tough to crack.

But that may be the very reason why labor should focus on the South. As MaryBe McMillan, Secretary-Treasurer of the North Carolina AFL-CIO pointed out in a recent piece at Facing South:

Civil rights leaders knew the only way to win freedom for people of color everywhere was to win it first in the most difficult place -- the segregated South ... The Southern United States is the center for exploitation of workers of all colors. Employees in the South have the lowest wages, the fewest worker protections and the least union representation.

If we want a more worker-friendly Congress, then workers in the South need to believe that change is possible. That's hard to do in places like Hickory [North Carolina], where there is no voice to counter what folks hear on talk radio. There is no union organizing workers. There is no central labor council mobilizing people for collective action. There are no canvassers from Working America talking to folks about taking our country back from the CEOs and Big Banks. Unions have largely chosen not to invest in the South, and as a result, there is no labor movement in many areas to challenge the status quo.

I have heard national labor leaders say that we are at a critical moment in our movement, and that to grow, we must convince the public that we are the voice for all workers. If that's true, then we must win the hearts and minds of workers in my hometown and small towns across the South. Because if we don't, we will see the violent union-busting and repressive laws of the South spread throughout the country.

Just as Dr. King dreamed our nation would rise from the "quick sands of racial injustice," he and also envisioned a country that protected the rights of workers and honored labor. Indeed, in another detail Glenn Beck apparently missed, Dr. King was killed in Memphis in 1968 while visiting the city to support striking sanitation workers.

To honor Dr. King's vision for our country, we must honor labor in the South and beyond.

PHOTO: Memphis sanitation workers on strike in 1968; Dr. Martin Luther King, Jr. was in the city to support the group when he was shot and killed in April. Richard L. Copley/AFSCME.

A new day for labor in the South?