Skip to main content
Join the voice for a changing South.
Donate Today
By Sue SturgisDecember 16, 2010 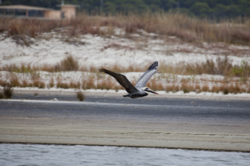 The Department of Justice announced yesterday that it was suing BP and eight other defendants for their roles in the oil rig disaster that claimed the lives of 11 workers and spilled 172 million gallons of oil into the Gulf of Mexico.

Not named in the suit are companies such as Halliburton that provided services to the well, or companies that manufactured components that malfunctioned such as Cameron International, maker of the blowout preventer.

The government's action will now join hundreds of other lawsuits filed over the Gulf oil disaster.

In its complaint [pdf], the federal government alleges violations of federal safety regulations, including failures to take necessary precautions to secure the well prior to the explosion, utilize the best technology to monitor the well's condition, maintain continuous surveillance of the well, and utilize and maintain safety equipment appropriately.

"We intend to prove that these violations caused or contributed to this massive oil spill, and that the defendants are therefore responsible -- under the Oil Pollution Act -- for government removal costs, economic losses, and environmental damages," said U.S. Attorney General Eric Holder.

The DOJ is also seeking civil penalties under the Clean Water Act, alleging that the defendants were in violation of the law while the oil was spilling into the Gulf. The government did not attempt to place a dollar figure on the amount it's seeking from the defendants, instead holding them liable "without limitation."

During the press conference announcing the lawsuit, Holder said that the spill "has been contained." And while it's true that the well is no longer gushing oil into the Gulf, the oil that was spilled from April through July continues to wash up along the coast.

That point was driven home by a video released yesterday by Hurricane Creekkeeper John Wathen showing the ongoing cleanup operations on Alabama's Dauphin Island, a tourism center and home to a number of bird sanctuaries. Though cleanup workers were toiling along the beach, Wathen says he's never seen the area in such bad condition, with the beaches stained yellow-brown, thick black mats of a mysterious rubbery substance covering large areas, and the surf a foamy brown and stinking of petroleum.

"My greatest fear is that this is only the beginning," Wathen says in the video. "This is only the first year after the disaster. How much more is going to wash up on our beaches? How much more is going to wash up on the marshes? How much more from Texas to Florida is going to die in the Gulf of Mexico before this government and BP comes clean with the people and tells them exactly what we're facing down there? This is a disaster of historic proportions and the people once again are paying the price for greed, profit and lack of accountability."

(Photo of pelican flying over oil-stained Dauphin Island, Ala. on Dec. 11, 2010 by Hurricane Creekkeeper John Wathen.)