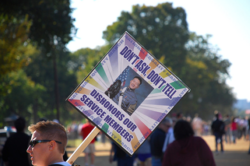 Date on which the Senate repealed the "Don't Ask, Don't Tell" policy prohibiting gay, lesbian and bisexual soldiers from serving openly in the military: 12/18/2010

Number of U.S. service members who have been discharged under the policy since it was adopted in 1993: more than 13,300

Of the 11 states where both Senators voted against repeal, number in the South: 6*

Of the 28 states where both Senators voted for repeal, number in the South: 3**

Number of Democrats who voted against the repeal: 0

Number of Republicans who voted for the repeal: 8***

Number of days after the secretary of defense and chairman of the Joint Chiefs of Staff sign a letter certifying that the change won't affect military readiness that the new policy will take effect: 60

Date on which the Pentagon released a report that concluded repealing DADT would present little risk to the armed forces' ability to carry out their missions: 11/30/2010

In a Pentagon survey, percent of U.S. military personnel overall who expressed negative views about the repeal's impact: about 30

Percent of Marines who said it would have a negative effect: about 45

Percent of combat-arms Marine who have a negative view of the repeal: 56

Percent of Americans surveyed in a Washington Post-ABC News poll who said they favored ending DADT: 77

Percent of the more than 54,000 respondents in a recent conservative Fox News poll who said that ending the policy would not affect America's ability to defend itself: almost 61

Date on which Sen. Lindsey Graham (R-S.C.), who had been considered one of the likely GOP supporters of the START nuclear arms reduction pact, said he would vote against the treaty in part because of the DADT repeal: 12/19/2010