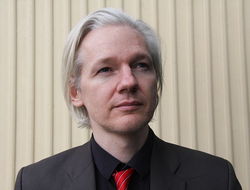 Year that President Woodrow Wilson called for "open diplomacy" that "shall proceed always frankly and in the public view": 1918

Number of classified U.S. war files from Iraq that the group leaked in October: 400,000

Number of classified war files from Afghanistan it released in July: more than 76,000

Date the Justice Department opened an investigation into the leaking of the Afghanistan War documents: 7/2010

Date when five human rights groups called on WikiLeaks to be more careful about redacting the names of people whose lives could be placed at risk by disclosure: 8/2010

Date of one diplomatic cable in which the Afghani interior minister urged the State Department to quash a reporter asking about an incident in which Virginia-based war contractor DynCorp threw a party for Afghani police recruits that included a traditional form of child prostitution involving young boys: 6/24/2009

Number of official U.S. investigations into DynCorp underway as a result of that incident: 0

Date Amazon.com forced WikiLeaks off its web servers after U.S. congressional staffers started asking the company about its relationship with the group: 12/1/2010

Date on which the Library of Congress acknowledged that it was blocking access to WikiLeaks: 12/3/2010

Date that former Arkansas Gov. Mike Huckabee (R) said that anything less than execution would be "too kind a penalty" for leaking the State Department documents: 11/29/2010

Date that Rep. Ron Paul (R-Texas) said Assange should not be pursued because "in a free society we're supposed to know the truth": 12/2/2010

Month that Rep. Lamar Smith (R-Texas), who's called for hearings into WikiLeaks, is expected to take over the House Judiciary Committee: 1/2011

Number of offenses Assange has been formally charged with in the U.S. to date: 0

Date on which Assange is accused of committing a crime in Sweden by engaging in consensual sex with his host, Anna Ardin, during which a condom reportedly failed: 8/13/2010

Date on which Ardin, during a party she threw for Assange, tweeted that she was sitting with "the world's coolest smartest people, it's amazing": 8/15/2010

Date on which Assange had sex with another Swedish woman, an aspiring photographer named Sofia Wilen who afterward reportedly sent text messages bragging about the encounter: 8/16/2010

Date that Ardin and the other woman filed a complaint with Swedish police that centered around issues involving condom use: 8/20/2010

Date on which Swedish authorities issued an international arrest warrant for Assange related to the sex charges: 11/20/2010

Number of criminal offenses that Assange has been formally charged with in Sweden: 0

Date on which Assange turned himself in to British police while courts consider extradition: 12/7/2010

Estimated portion of Internet references to Assange that now refer to rape: about 3/4

Date on which John Perry Barlow, co-founder of the anti-censorship Electronic Frontier Foundation, tweeted a message that said, "The first serious infowar is now engaged. The field of battle is WikiLeaks. You are the troops": 12/3/2010

Number of hours that elapsed between a British judge's decision to deny Assange bail and the mounting of retaliatory attacks by Internet activists on the websites of multinational companies and others deemed hostile to Assange: 12

Number of Wikileaks' Facebook fans to date: more than 1.1 million

Number of people who have signed a petition calling for an end to the crackdown on WikiLeaks and its partners: more than 275,000

(Click on figure to go to source. Photo of WikiLeaks founder Julian Assange by Espen Moe via Wikipedia.)

INSTITUTE INDEX: The Iraq War at 10