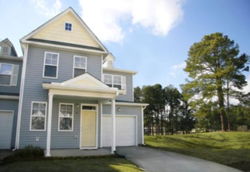 A 5-month-old baby who had been living in on-base housing at Fort Bragg died over the weekend, bringing to 11 the number of infants who have passed away suddenly of unknown causes at the North Carolina military installation since 2007.

The Army Investigation Command and the U.S. Consumer Product Safety Commission (CPSC) are probing the mysterious deaths -- and there are concerns that drywall made from a coal ash byproduct could be a factor.

According to the CPSC's most recent update on its probe, the agency has received more than 3,600 reports of problems related to drywall from 38 states and territories. More than 90 percent of the reports are from five Southern states: Florida (57 percent), Louisiana (19 percent), Mississippi (7 percent), Alabama (6 percent) and Virginia (4 percent). In October, a settlement was reached in a class-action lawsuit filed in New Orleans over bad drywall, with one manufacturer agreeing to pay affected homeowners' remediation costs.

Most of the homes with problems had drywall that was manufactured in China and imported to the United States during a drywall shortage following Hurricane Katrina and Rita in 2005. However, the CPSC reports that some homes with drywall that wasn't made in China have also had issues. While the agency says non-Chinese drywall represents only a "very small fraction" of total reported incidents, a CBS News investigation found that about a quarter of 44 cases for which the agency released details last year involved U.S.-made drywall.

The problems associated with the tainted drywall include a "rotten egg" smell -- a sign it's off-gassing hydrogen sulfide -- and related corrosion or blackening of metal components such as electrical fixtures, appliances, plumbing and air conditioner coils. Some people in affected homes have also reported health effects including itchy eyes and skin, respiratory problems, persistent coughs, bloody noses and headaches. Hydrogen sulfide is known to irritate the eyes, nose and throat, while exposures to high concentrations can cause headaches and damage attention, memory and motor function.

The ongoing CPSC investigation into the drywall has encountered difficulties due to an unwillingness by Chinese government officials and manufacturers to share information about the products in question.

Back in October, ProPublica and the Sarasota Herald-Tribune reported on a trip that a team of CPSC investigators made to China last year. The investigators visited gypsum mines as well as plants where drywall is manufactured from what's known as flue gas desulfurization or FGD gypsum, a synthetic form of gypsum created when coal-fired power plants use lime to capture sulfur from smokestack gases. FGD gypsum is nearly chemically identical to mined gypsum, making it hard to tell whether drywall is made from the mined or synthetic stuff.

It's becoming increasingly popular to make drywall out of FGD gypsum because it's cheaper than mined gypsum. And as Facing South has reported, there's a growing emphasis on recycling coal ash byproducts into building materials as a way of keeping it out of landfills and surface impoundments like the one that failed catastrophically at a Tennessee coal-fired power plant two years ago this month.

In the U.S. in 2008, 8.5 million tons of FGD gypsum went into drywall products, according to the American Coal Ash Association. Nowadays about 35 percent of the drywall manufactured in the United States is made with FGD gypsum.

While the recycling eliminates the environmental impacts associated with gypsum mining, there are concerns about the process by which gypsum is being turned into drywall -- and whether something is happening that's leading to the contamination problem. The CPSC investigators witnessed sloppy work at both the Chinese gypsum mines and the FGD gypsum plant. For example, the FGD gypsum plant got its raw material from five different coal-fired power plants and dumped it all in one big pile, making it impossible to track tainted FGD gypsum back to its source.

Picerne, the private contractor that provides housing for Fort Bragg residents, has renovated and rebuilt thousands of houses on the base in recent years, during the period when the problem drywall was being imported from China in large quantities. At least six of the houses where infants died were built in the past five years, the Fayetteville (N.C.) Observer reports.

Fort Bragg officials have said their own tests rule out the homes' environment as a cause of the deaths. However, CPSC field reports on two of the houses where babies died -- including one house linked to three infant deaths -- found signs of elevated sulfur levels such as corroded metal and foul smells. And while Picerne has claimed it's used only U.S.-made drywall products, the CPSC noted Chinese characters on the backs of the drywall boards in one of the homes, according to the Fayetteville Observer. Results of the CPSC tests of the homes in question are still pending, and may bring some answers about the drywall.

Meanwhile, the U.S. Environmental Protection Agency is expected to release a final regulation for coal ash some time this month. But both versions of the proposed rules EPA released earlier this year for public comment -- one regulating the material more strictly as a special hazardous waste and the other treating it like ordinary waste -- don't impose any restrictions on the use of coal ash to make drywall. Instead, they leave it up to manufacturers to ensure their product is safe.

(Photo of on-base housing at Fort Bragg from Picerne's website.)