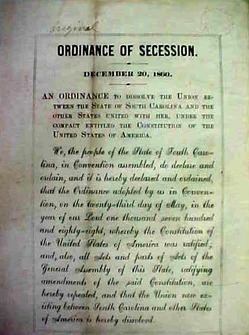 On Dec. 20, the group Sons of Confederate Veterans is holding a $100-per-person "Secession Gala" in Charleston, S.C.  to celebrate the state's signing 150 years ago of the Ordinance of Secession -- the document whereby slave-holding states that would eventually form the Confederacy abandoned the Union and sparked the Civil War.

The NAACP plans to protest the ball, which is part of a series of events that heritage groups are holding to commemorate the war's sesquicentennial. NAACP South Carolina chapter President Lonnie Randolph likened the ball to celebrating the Holocaust:


"You couldn't pay the folks in Charleston to hold a Holocaust gala, could you? But you know these are nothing but black people, so nobody pays them any attention."

Organizer Jeff Antley, a member of SCV and Confederate Heritage Trust, bristles at the comparison:

"It has nothing to do with slavery as far as I'm concerned," he said. "What I'm doing is honoring the men from this state who stood up for their self-government and their rights under law -- the right to secede was understood."

But Antley's claim that secession had "nothing to do with slavery" belies either ignorance or denial of historic facts.

It's true that the Ordinance of Secession -- the original copy of which (pictured above) will be on display at the gala -- doesn't mention slavery. But the brief document doesn't mention any reason for the decision to dissolve the Union, stating only that a convention of the people of South Carolina gathered in Charleston on Dec. 20, 1860 and voted to repeal the state's ratification of the U.S. Constitution.

For what was behind the decision, we have to turn to a document the same convention drew up and signed four days later titled "Declaration of the Immediate Causes Which Induce and Justify the Secession of South Carolina From the Federal Union."

Slavery is its major theme.

The declaration opens by tracing the history of how South Carolina came to ratify the U.S. Constitution and notes that "in every compact between two or more parties, the obligation is mutual; that the failure of one of the contracting parties to perform a material part of the agreement entirely releases the obligation of the other."

Fourteen states, the declaration charges, "have deliberately refused, for years, to fulfill their constitutional obligations" -- specifically, the runaway-slave section of the Constitution's Article IV, which was superseded in 1865 by the 13th Amendment. That section says:

Pointing out that the Northern states had enacted laws "which either nullify the Acts of Congress or render useless any attempt to execute them," the declaration charges that the compact has been broken and "South Carolina is released from her obligation." It continues:

"We affirm that these ends for which this Government was instituted have been defeated, and the Government itself has been made destructive of them by the action of the non-slaveholding States. Those States have assumed the right of deciding upon the propriety of our domestic institutions; and have denied the rights of property established in fifteen of the States and recognized by the Constitution; they have denounced as sinful the institution of slavery; they have permitted open establishment among them of societies, whose avowed object is to disturb the peace and to eloigning the property of the citizens of other States. They have encouraged and assisted thousands of our slaves to leave their homes; and those who remain, have been incited by emissaries, books and pictures to servile insurrection."

Observing that the North elected as President a man "whose opinions and purposes are hostile to slavery," the declaration says that

"submersion of the Constitution ... has been aided in some of the States by elevating to citizenship, persons who, by the supreme law of the land, are incapable of becoming citizens; and their votes have been used to inaugurate a new policy, hostile to the South, and destructive of its beliefs and safety."

As the historic record shows, South Carolina's secession had everything to do with slavery. That SCV would deny this shows the group is unwilling or unable to honor the full truth of their lost cause.

Give me some of that old time secession