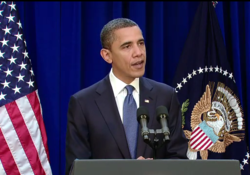 They're calling it Obama's PATCO -- his proposal for a two-year wage freeze for two million federal workers. When Ronald Reagan fired 13,000 striking PATCO members, the air traffic controllers, in August 1981, he sent a signal to other employers that it was open season on unions -- and the era of concessions began.

Now, around the country, governments at the city, county, and state level faced with budget deficits and already engaged in layoffs and furloughs will use the president's position to justify their actions. Private industry -- which hardly needed encouragement -- will do the same.

One union stalwart wrote to Labor Notes, "It certainly sends a chill through me at my shop, where we took huge wage cuts in the last go-round, and I anticipated a fight to win back some of it when we bargain next spring. Now we have the head of the government, a pro-labor guy no less, calling for a freeze, and even though I am not in a government job, he has pulled the rug out from under us.

"Employers at unionized companies will turn to union officials and say, 'Your own guy is authorizing this, how do you expect us to give you a raise?'"

What a way for Obama to repay all those union members who staffed phone banks, got out the yard signs, and knocked on doors to elect him.

Obama told the press, "Small businesses and families are tightening their belts. The government should, too." John Gage, president of the Government Employees union (AFGE), called Obama's proposal "a slap at working people." Colleen Kelley, head of the Treasury Employees (NTEU), said union officials would try to stop the plan in Congress. Whether the unions can get the Democrats they elected to stand up to Obama, the Democrat-in-Chief, remains to be seen.

One thing is sure: The move is pure political theater, in terms of achieving its stated aim, reducing the federal deficit. The freeze would shave $5 billion by 2012 from a $1.3 trillion deficit -- a minuscule 0.4 percent savings. The U.S. Office of Personnel Management says federal worker yearly earnings average around $75,000, partly because these workers boast longer service on the job and better education than private sector counterparts -- nearly half are college graduates. Two of the largest job categories of federal workers are nurses and IT specialists.

A lot of the less-skilled, lower-paid federal jobs have been contracted out. In addition, averages are skewed upwards by many levels of management at the top. Pay for federal workers ranges from a VA nursing assistant making $28,000, as AFGE points out, up to Congress members' $174,000 and beyond.

Obama's certainly not going after the real money. The banks -- you remember, the banks we bailed out after they caused the economic crisis -- have returned to paying enormous, multimillion-dollar bonuses. Banks' revenues (3 percent) are being outpaced by their bonuses (4 percent), with hedge funds and banks paying hundreds of employees bonuses that average more than $500,000 -- each.

Last January Obama called these bonuses "obscene," but he never found the political will or wherewithal to stop them.

So while federal workers feel the freeze, bankers are warm and cozy.

What's most disturbing about Obama's slap at federal workers is that it's part of a pattern. Secretary of Education Arne Duncan is in full "blame the teacher" mode, with his Race to the Top incentives that decimate unions and teacher rights. The Fiscal Commission co-chairs that Obama appointed want to cut Social Security, starting next year. His bailout of Chrysler and GM laid off tens of thousands of workers, cut pay -- in half -- for future auto workers, obliterated their pension, and took away workers' right to strike.

He saved the bankers and the auto execs, and slaps down federal workers, school teachers, auto workers, retirees -- and the rest of us.

(The photo above is a still from a White House video of President Obama announcing the federal wage freeze.)