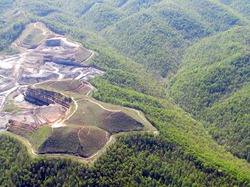 The U.S. Environmental Protection Agency announced yesterday that it was using its rarely-exercised authority under the Clean Water Act to veto a permit for the largest mountaintop removal operation in West Virginia history.

First proposed in the 1990s, the Spruce No. 1 Mine -- owned by St. Louis-based Arch Coal's Mingo-Logan Coal Co. -- has since been the subject of extensive litigation. While the Army Corps of Engineers granted the operation a permit under its authority, the EPA never signed off on the project, repeatedly raising concerns about its environmental impact.

In its Jan. 13 announcement that it was denying the permit after more than a year of negotiations with the company, the agency reiterated those environmental issues.

"The proposed Spruce No. 1 Mine would use destructive and unsustainable mining practices that jeopardize the health of Appalachian communities and clean water on which they depend," said Peter S. Silva, EPA's assistant administrator for water.

Mountaintop removal mining, which is common throughout Central Appalachia, involves blasting the tops off of mountains to reach the coal below, and dumping the resulting waste into valley streams.

Among the concerns cited by the EPA in rejecting the permit for the 2,300-acre mine in Logan County, W.Va. was that the proposed project would have disposed of 110 million cubic yards of coal mine waste into streams, buried more than 35,000 feet of high-quality streams under mining waste, and polluted downstream waters.

Section 404(c) of the Clean Water Act authorizes EPA to restrict the placing of fill material in streams and other waters if the activities would result in "unacceptable adverse effects" on the environment, water quality or water supplies.

Environmental advocates hailed the decision. Robert F. Kennedy Jr., chair of the Waterkeeper Alliance, called EPA Administrator Lisa Jackson "an American hero and the most courageous administrator in EPA history" for her willingness to "stand up to the bullies and polluters at big coal."

But Kennedy noted that mountaintop removal opponents still face a difficult road ahead.

Indeed. For one thing, while EPA denied approval for Arch Coal's plans to dump waste from the Spruce mine site into 6.6 miles of streams and creeks, it's allowing mining to continue on another part of the site that will result in the burying of almost a mile of streams.

The agency notes that while it has authority under the Clean Water Act to restrict dumping into streams at currently permitted operations, it is not considering doing that. Furthermore, EPA does not rule out approving other mountaintop removal permits in the future.

Meanwhile, the industry and the politicians who represent its interests -- some of whom are incorrectly claiming that the permit had received final approval -- are calling for the courts to overrule EPA. Acting West Virginia Gov. Earl Ray Tomblin said the state "will continue with all efforts to get this decision reversed."

Appalachian Voices notes that Congressman Nick Rahall (D-W.Va.) has said legislation to end mountaintop removal had more than 400 votes in the 435-member House of Representatives -- but that he was blocking the bill.

Attorneys for Arch Coal had previously challenged EPA's review of the permit, and that lawsuit is pending in federal court.

(Photo of the Spruce Mine site in Logan County, W.Va. by Vivian Stockman of the Ohio Valley Environmental Coalition taken during a flyover with SouthWings.)

A turning point on mountaintop removal?