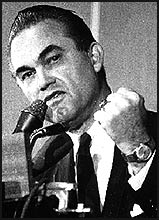 The tragic Arizona shootings that left six dead and others, including Rep. Gabrielle Giffords (D) critically wounded, have sparked debate over an important question: What's the connection between violent political rhetoric and real violence?

It's not a new debate, especially in the South, where the bloody civil rights era forced Southerners and the nation to confront how extremist and violent political messages can have deadly results.

As of last year, the FBI was still investigating over 100 unsolved murders that happened during the Southern civil rights struggle. That doesn't include the dozens of killings that have been successfully prosecuted, including the shooting of Martin Luther King, Jr. in 1968, whose life will be memorialized this coming weekend.

Many civil rights activists, scholars and reporters maintain there was a direct line between this blood-stained chapter in U.S. history and the violent rhetoric of politicians like George Wallace, the Alabama governor and presidential hopeful whose fiery defense of segregation defined an era.

After a failed run for governor as a liberal, Wallace resuscitated his career by becoming a staunch opponent of integration and the "integratin', scalawaggin', carpetbaggin' liars" that favored change. His message: When it came to the federal government, "resist them to the hilt" in defending the Southern way of life.

As Howell Raines of The New York Times wrote after Wallace's death, many believe his demagoguery had deadly consequences:

On the stump, Mr. Wallace always had a ready answer for the murder epidemic that hit Alabama after his election. He personally did not condone violence. But as civil rights leaders pointed out, that begged the question of the impact Mr. Wallace's rhetorical violence had on the gross and simple minds of back-alley racists.

In a personal meeting in 1965, the Rev. Joseph L. Lowery of the Southern Christian Leadership Conference reminded Mr. Wallace of their shared Methodist religion and warned the governor that his defiant demand that Alabamians "stand up for segregation" gave moral permission for thugs to use their pistols, lead pipes and dynamite. Mr. Wallace responded to such preachments with what Dan Carter correctly labeled a "reckless disregard" for the impact of his words on public safety in Alabama.

Dr. King was especially adamant that Wallace and other Southern politicians who inflamed racist sentiments were complicit in the era's trail of blood. On September 16, 1963 -- the day after four African-American girls were killed in a church bombing in Birmingham -- King wrote

The governor said things and did things which caused these people to feel that they were aided and abetted by the highest officer in the state. The murders of yesterday stand as blood on the hands of Governor Wallace.

The evidence seems to support King and others who argue there was a connection: As Raines notes, 12 people were killed in civil rights-related slayings during Wallace's first term between 1963 and 1966 -- a product not only of Wallace's escalating rhetoric, but also his famous unwillingness to prosecute the murder suspects.

And then there was Dr. King himself: James Earl Ray, the man eventually convicted for shooting King, was greatly influenced by Wallace and his agenda, even moving to Los Angeles to volunteer in Wallace's campaign headquarters in North Hollywood.

Several commentators have noted the similarity of today's Tea Party to the Wallace campaigns. Indeed, the principles of Wallace's American Independent Party in 1968 read remarkably like a Tea Party manifesto:

A new party is urgently needed today because the leaders of the two existing parties, Democrat and Republican, have deserted the principles and traditions of our nation's founding fathers. Both of the existing parties have become the proponents of big government, crushing taxation, dictatorial federal power, waste and fiscal irresponsibility, unwholesome and disastrous internationalism, compromise with our nation's enemies, and authoritarian regimentation of the citizens of this Republic. Control of the government, under the domination of these two existing parties, has left the hands of the people our government was created to serve.

Even George Wallace's son -- a candidate for Alabama state treasurer in 2010 -- said of the Tea Party, "It does remind me of my dad's campaigns ... They are conservative, they want less government and they will make their voice known in November."

It's also not hard to find similarities in the tone -- and violent undertone -- used by Wallace and the Tea Party. As commentator Tim Wise observes:

In a media environment where highly paid commentators can keep their jobs even as they insist that those who call for the shooting of government agents so as to stop a world government takeover are "beginning to have a case," or that a national service initiative is just a run-up to the implementation of a literal stormtrooper corps like the Nazi SS, or that "multicultural people" are "destroying the culture of this country," or that Latino migrants are an "invasive species," that seeks to undermine the nation, or that the President is intentionally "destroying the economy" so as to pay white people back for slavery, or that, worse, he and other Democrats are vampires, the only solution for which is a "stake through the heart," to feign shock at the acts of a Jared Loughner is a precious and naive conceit that we can no longer afford.

Civil rights history has provided us with compelling evidence that such rhetoric from key public figures can have deadly results. Has our nation learned the South's lesson?

FROM THE SOUTHERN EXPOSURE ARCHIVES: Women and lynching