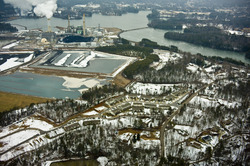 That's the finding of a review of the analysis [pdf] by the nonprofit Environmental Integrity Project, Earthjustice and the Stockholm Environment Institute's U.S. Center at Tufts University. The groups charge that the EPA's haphazard and unsupported assumptions slant the playing field against the stricter version of the proposed regulations.

"The agency is assuming many times more benefits from recycling than it can support with data," said EIP Director Eric Schaeffer during a press conference held last week to publicize the groups' findings, which were also submitted to the EPA during last year's comment period on the two coal ash regulatory proposals.

The electric utility and coal-ash recycling industries are fighting the stricter rule by arguing that regulating the material as hazardous waste would create a stigma that would discourage recycling. But environmental advocates dispute that claim. In fact, they say that tough coal ash disposal rules would create greater incentives to recycle the material in order to keep it out of unsafe surface impoundments like the one that collapsed two years ago at the Tennessee Valley Authority's Kingston coal plant in eastern Tennessee.

In its cost-benefit analysis, the EPA claimed that recycling coal ash into wallboard and other products is worth more than $23 billion a year, based on the annual life-cycle benefits of avoiding pollution and reducing energy costs. However, that estimate is more than 20 times higher than the $1.15 billion that the federal government's own data shows as a more realistic figure.

Among the problems with EPA's calculation is that it overstated emissions from cement kilns, double-counted pollution reductions under Clean Air Act rules, mistakenly applied a formula designed to measure fine particle health costs to the reduction of larger particles from gypsum manufacturers, and assumed savings from reducing energy consumption at cement kilns and gypsum plants that contradict federal data.

At the same time, the agency neglected to consider the full range of public health benefits from strict regulation of coal ash disposal. For example, while it considered the cost benefits of avoiding lung and bladder cancers associated with arsenic from coal ash groundwater contamination, it did not consider the benefits of avoiding other cancers and illnesses associated with heavy metal exposure such as heart disease, birth defects and nervous system disorders.

"It should come as no surprise that requiring safe landfills for coal ash is less costly than allowing ash dumps to contaminate water in hundreds of communities around the country," said Earthjustice Attorney Abigail Dillen. "What is surprising, in the face of this major public health threat, is that the books are being cooked to accommodate the coal industry."

(Photo of the coal ash impoundments adjacent to a residential neighborhood at Progress Energy's Asheville, N.C. power plant was taken last year by J. Henry Fair during a flyover with SouthWings.)