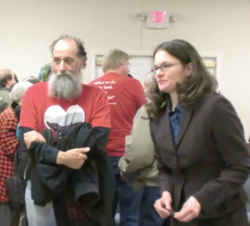 A battle that took place last week in a Kentucky courtroom shined a spotlight on the cozy relationship between the coal industry and the state -- and will help decide whether citizens have the right to intervene in an environmental enforcement case that's been mishandled by regulators.

On Thursday, Jan. 27, clean water advocates appeared at a circuit court hearing in Frankfort, Ky. to argue for their motion that they should be allowed to intervene in the state's case against International Coal Group and Frasure Creek Mining over massive clean water violations at mining operations in eastern Kentucky.

The case stems from a legal action that a coalition of environmental groups launched back in October 2010 charging the companies with committing more than 20,000 violations of the federal Clean Water Act. The Appalachian Citizens' Law Center, Appalachian Voices, Kentuckians for the Commonwealth, Kentucky Riverkeeper and the Waterkeeper Alliance filed a 60-day notice of intent to sue, citing research that found the companies engaged in misdeeds including exceeding pollution discharge limits set by state permits, failing to conduct required monitoring of discharges, and submitting false monitoring data to state agencies.

Among the claims was that the companies' monitoring reports filed with state regulators showed exactly the same discharge data over time, indicating the companies were re-filing previously submitted reports under a different signature and date. In some cases company officials simply scratched out the old date and wrote in another -- a criminal act that can bring jail time.

On the 59th day of the 60-day response period, Kentucky officials announced a settlement agreement including a total of $660,000 in fines against the two coal companies -- an amount that represents less than 1 percent of the maximum that could be imposed under the Clean Water Act. The state also dismissed evidence of fraud, attributing the data discrepancies to clerical errors. Kentucky's action pre-empted the advocates' legal case.

But then last month, the environmentalists filed a motion to intervene in the settlement -- a move that could force the state and mining companies to release documents related to the enforcement action and give the advocates a say regarding fines and other enforcement actions.

Kentucky doesn't want the environmental groups involved, though, calling their involvement an "unwarranted burden." However, a state judge granted the groups permission to file a brief in support of their motion to intervene and ordered the state to post the full complaint and judgment on the web for a 30-day public comment period.

Appalachian Voices and the Kentucky Riverkeeper responded by submitting public comments [pdf] that detailed even more evidence of fraud and cast doubt on the state's assertion that these were mere clerical errors.

"I think you are entitled to your day in court, whether it's here or someplace else," he told the environmentalists -- suggesting that a federal court might be the proper venue for their case. Shepherd said he faces difficult legal issues but expects to issue a ruling soon.

Donna Lisenby, the Upper Watauga Riverkeeper with Appalachian Voices, shot a short video in the court room prior to the start of the proceedings discussing the background on the case and introducing some of the players. You can watch it here:


(In the photo above, a still from Lisenby's video, are Doug Doerrfeld with Kentuckians for the Commonwealth and Mary Cromer, an attorney with Appalachian Citizens' Law Center.)

One woman's fight for the right to vote (video)