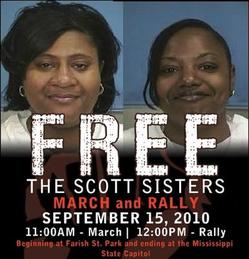 Last week, NAACP President Ben Jealous called Mississippi Governor Haley Barbour "a shining example" of how governors should use their clemency powers, following Barbour's release of Jamie and Gladys Scott. The two sisters had been serving life sentences since 1994 for an $11 armed robbery they insist they did not commit. Three other teens who did admit participating in the robbery -- and who claimed they were coerced to implicate the sisters -- were sentenced to just two years.

Jealous's praise of Barbour as a "shining example" was stunning, given Barbour's years of resistance in the face of a national campaign for the sisters' release and the conditions he imposed on the two women when he finally did show mercy. Thirty-six-year-old Gladys must donate a kidney to 38-year-old Jamie, who is seriously ill. Meanwhile, four convicted killers whom Barbour earlier pardoned and another whose life sentence he suspended had no conditions placed on them in return for clemency, despite the brutality of their crimes.

Nor has Barbour been a "shining example" of racial tolerance and sensitivity in general. In recent months, he's made a series of foot-in-mouth gaffes, praising Confederate History Month, defending the racist white Citizens Council as good red-blooded patriots who did the right thing to aid integration, and playing down racial conflict in Mississippi during the turbulent 1960s.

Haley was forced to back-pedal on all these comments, blasting the Citizens Council for their support of segregation, clamming up on Confederate History Month, and praising Martin Luther King, Jr. and the civil rights movement for their efforts to integrate his state. Now, the release of the Scott sisters fits in with the new script that Barbour is obviously rewriting for himself and the GOP.

The reason for this series of about-faces is obvious: Barbour sniffs the presidency. The GOP field for 2012 is wide open, and the candidate with the name, position, money, and -- most importantly -- political base will have an enormous advantage against the rest of the GOP pack. As one-time Republican National Committee chairman and current chairman of the Republican Governors Association, Barbour has raised tens of millions of dollars for GOP candidates. He has name identification and is a force in regional politics in the South -- the white GOP South, that is. The region is still a trump card for any GOP aspirant to the White House, as the 2008 presidential vote proved. While Democrat Barack Obama made a major breakthrough in winning a significant percentage of votes from white independents and young white voters, contrary to popular perception, in the end it was Republican John McCain, and not Obama, who carried white voters by a slim majority. Overall, Obama won just slightly more than 40 percent of the white male vote. Among white men in the South and Heartland America, Obama made almost no impact.

Still, the GOP's overreliance on Southern voters is fraught with political peril. Barbour's string of recent gaffes has found plenty of echoes among politicians around the region -- for example, in Kentucky Senator-elect Rand Paul's views on the nation's civil rights laws and in Virginia Governor Bob McDonnell's unrepentant support for Confederate History Month. During the past decade, a parade of Republican state and local officials, conservative talk-show jocks and GOP party leaders have made remarks that typecast the South as a region that remains friendly to unreconstructed racists and religious and social bigots. When called on the carpet, these racists invariably respond the same way: They duck, dodge, and deny, claiming that they were misquoted and, when this proves to be untrue, issuing a halfhearted apology. Time after time, GOP leaders also have the same reaction: silence, or, if the firestorm is large enough, a much-delayed and mild verbal hand-slap.

This history isn't just a problem for a Barbour presidential candidacy. It also seriously threatens the GOP's chances of winning back the White House. A near-solid GOP South is not enough to tip the White House to the party any longer. Obama's 50-state strategy (masterminded by Howard Dean) and the enthusiasm he generated among black, Hispanic, Asian, and young voters more than offset the white, male, conservative vote for the GOP in 2008.

Barbour's release of the Scott sisters must be seen in the light of his presidential ambitions. A perfect storm of hot-button issues -- race, gender, politics, medical compassion, and a criminal justice system skewered against minorities -- forced him to make some redress. Barbour deserves credit for taking the step to right a colossal legal wrong. But this burst of compassion doesn't absolve Barbour, the GOP or the white South of their ugly racial history -- a history that is certainly no shining example of justice and fairness.

VOICES: Why everyone should know about Kamau Marcharia

VOICES: The Siegelman case: Why Obama must get it right on justice issues