As a Facing South series looking at Pope's influence documented, Pope's family foundation supplies about 90 percent of the income for policy groups and think tanks that promote a conservative agenda in the state.

On the political side, Pope's money was also key to the Republican Party's historic takeover of the N.C. legislature in 2010: Facing South found that Pope's groups and family members injected over $2.2 million into 22 state races, helping fuel the GOP to victory.

Now, as North Carolina Republicans prepare to assume leadership this week, political observers are wondering: What kind of influence will Pope and his network of organizations have in pushing their agenda for the state in 2011?

The question of Pope's influence was underscored in early January, when Rep. Paul "Skip" Stam (R) announced he was hiring from groups in Pope's network for key staff positions.

Another way to measure Pope's influence is to compare the issues that state Republicans have pledged to make top priorities in 2011, and comparing them to the legislative agendas promoted by Pope-backed organizations.

So far, two of the leading groups in Pope's network -- the John Locke Foundation and Americans for Prosperity-N.C. -- have announced their top 2011 agenda items for the state. Here's a chart showing how they match up with the top issues Republicans ran on in November 2010 and have recently told reporters are at the top of their to-do list: 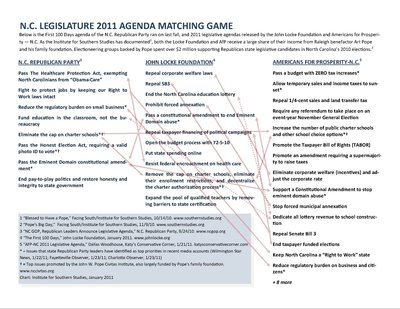 The comparison reveals several core areas where the state's Republican leadership and Pope-backed groups are unified:

1) LESS TAXES: Republicans are vowing to let a temporary increase in the sales tax expire at the end of the fiscal year, a move supported by Americans for Prosperity and the John W. Pope Civitas Institute, which is also largely supported by Pope's foundation. It's also a move that's hard to square with the GOP's other top concern of balancing the state budget -- forcing even deeper cuts in schools and social services.

2) MORE CHARTER SCHOOLS: Recent news accounts have confirmed that state Republicans will move quickly to eliminate a state-wide cap on the number of charter schools, independent schools run with public backing. Advocates say charters promote innovation; detractors say they undermine public schools. Eliminating the state's 100-school limit is a priority for all of the groups in Pope's network.

3) VOTER ID: A bill requiring voters to show photo identification at the polls is also on the GOP's fast-track list. Although not a big issue for Locke or AfP, Civitas has led the charge for new voter restrictions through its N.C. Election Reform Network. There's no evidence that voter fraud is a widespread problem, and Republicans haven't explained how they'll account for thousands of voters -- like the elderly, disabled citizens and students -- who don't have a photo ID. If voters have to pay for it, critics say that amounts to a poll tax. If the state picks up the tab, what does that do to the state budget?

4) EMINENT DOMAIN: Republicans and all the Pope-backed groups want to end the state's use of eminent domain to take property for economic development projects.

After that, the agenda gets murkier. Socially-conservative Republicans are talking about a constitutional amendment to ban same-sex marriage, and long-time abortion foe Rep. Paul "Skip" Stam, the likely House majority leader, may push for an "informed consent" bill. Both are issues ignored by the Pope's network of groups.

The groups backed by Pope's foundation also have a wish-list of issues -- stopping subsidies used to lure companies to the state, repealing the state's renewable-energy laws (Senate Bill 3) and ending N.C. system of publicly-financed, "voter-owned" elections -- that the GOP has yet to signal are big priorities for lawmakers.

Which issues will end up being priorities for North Carolina's new Republican leadership? Will they hew closely to the agenda of Pope's network, or chart a more independent course? On issues like charter schools and voter ID, the answers are clear. For the rest: Stay tuned.

What happened in North Carolina? Lessons from the amendment battle