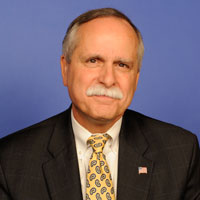 The House of Representatives approved an amendment to a federal spending bill over the weekend that would prevent the Environmental Protection Agency from regulating the toxic ash from coal-fired power plants as hazardous waste.

But advocates of strict federal oversight of coal ash regard the vote as a victory of sorts because they believe they got enough support to keep the fight alive in the Senate.

The final vote to pass the anti-regulatory amendment offered by Rep. David McKinley (R-W.Va.) (in photo) was 239 to 183. But a grassroots lobbying effort organized by the environmental advocacy group Earthjustice helped bring 19 Republicans to the pro-regulatory side -- about three times as many as supported any other environmental rider to the House spending bill.

McKinley's amendment would prevent the EPA from using funds to regulate coal ash as hazardous waste under the federal Resource Conservation and Recovery Act. The EPA released two proposed options last year for regulating coal ash -- the hazardous waste option, which is widely opposed by electric utilities, and an option that would treat the coal ash as ordinary waste under RCRA and provide much less stringent oversight.

There were 11 lawmakers who didn't vote on the amendment, nine of them Democrats and two Republicans.

The McKinley amendment was part of a broader GOP effort seeking to block stricter environmental regulations. Other amendments that passed included:

* A measure sponsored by Rep. Ralph Hall (R-Texas) to prohibit the National Oceanic and Atmospheric Administration from creating a new climate service;

* A proposal by Rep. John Carter (R-Texas) blocking EPA from imposing rules to cut mercury and other pollution from cement kilns.

The final amended legislation passed by a vote of 235 to 189 -- and came under harsh criticism from environmental advocates.

"The spending bill that passed early this morning is a shameful statement on the state of corporate-bought-and-paid-for politics in the House of Representatives," Martin Hayden, vice president of policy and legislation at Earthjustice, said Saturday. "Instead of slashing the excessive subsidies and offensive handouts to dirty energy industries, they have defunded the very programs that keep Americans safe and healthy."

(Photo of Rep. David McKinley from the House website.)