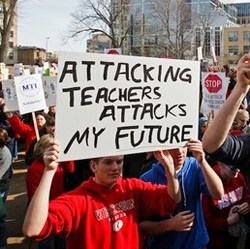 In 1959, the state of Wisconsin, a hotbed of labor activism and progressive politics, became the first state in the nation to give public workers the right to bargain collectively.

That same year, 1,000 miles away in North Carolina, state lawmakers -- stoked by Cold War anti-unionism and Jim Crow-era fears of interracial cooperation -- took a step in the opposite direction, passing one of a few laws in the nation that still ban public employees from having bargaining rights.

Today, the issue of labor rights for public workers is once again on the national agenda, sparked by Wisconsin Gov. Scott Walker's (R) move on February 11 to rescind bargaining rights there.

Gov. Walker not only sparked a wave of protests in Wisconsin and other Midwestern states, where similar measures are being considered; it's also revived calls by labor activists to revisit laws like the one in North Carolina, which the International Labor Organization ruled in 2007 was a violation of international labor standards.

This week, 100 labor, faith and civil rights leaders rallied at the North Carolina legislature, using the events in Wisconsin to make the case for why public workers need more clout. As Angaza Laughinghouse of the United Electrical, Radio and Machine Workers Local 150, which represents public employees, said:

This is a major economic crisis. This is also a time when they're chiseling away at our pensions, our health plans, basic health and safety rights, privatizing jobs. We know this is the best time to be raising this question of why North Carolina is denying public sector workers the right to collectively bargain.

When asked about the events in Wisconsin, one North Carolina state employee said, "Welcome to our world!"

Public workers in the South have few illusions about the uphill battle they face. For decades, Southern leaders have viewed promoting a friendly business climate -- including low unionization -- as a key to economic success.

Today, the forces allied against expanding Southern labor rights are in some ways more formidable. Record budget shortfalls have spurred lawmakers to call for containing public sector pay and benefits. Southern Republicans, after enjoying historic victories in 2010, have an opportunity to undermine a constituency that funds and mobilizes their Democratic opposition.

The Jim Crow origins of North Carolina's anti-bargaining law points to a bigger obstacle: The role of race in fueling the backlash against public sector employees.

As Kai Wright notes in ColorLines, 14.5 percent of public sector workers are African-American nationally; 23 percent of the black female workforce is in public administration. A report by United for a Fair Economy this year found that African-Americans were 30 percent more likely to hold a job in the public sector, where they still encountered relatively less discrimination and more job security.

Which is why Alyssa Battistoni argues in Salon:

[T]he portrayal of public sector employees as overpaid and underworked, taking advantage of hardworking taxpayers, carries echoes of racially charged caricatures -- the welfare queens of the '80s behind a desk in the Capitol.

As Battistoni also points out, many public sector jobs are disproportionately held by women -- 80 percent of teachers nationally -- which made Gov. Scott's decision in Wisconsin to exclude unions in the male-dominated firefighters and police unions especially controversial.

But workers in Wisconsin and North Carolina face another obstacle that goes beyond the issue of public sector bargaining rights: A broader attack on government and the public sector in general.

As the Economic Policy Institute documents, public employees don't enjoy great wealth; indeed, on average, those working in the public sector earn 11 to 12 percent less than their private counterparts.

But public workers are a symbol for government, which has been the target of a decades-long conservative offensive that criticizes the very idea of public services and spending. As former Democratic labor secretary Robert Reich recently wrote:

Public servants are convenient scapegoats ... It's far more convenient to go after people who are doing the public's work - sanitation workers, police officers, fire fighters, teachers, social workers, federal employees - to call them "faceless bureaucrats" and portray them as hooligans who are making off with your money and crippling federal and state budgets. The story fits better with the Republican's Big Lie that our problems are due to a government that's too big.

Reversing this broad anti-government sentiment won't be easy, but it does point to a strategy already taking shape in the streets of Wisconsin: When those concerned about the dangerous impact of slashing vital programs join with the workers who carry out those vital services, together they can show why a vibrant public sector is still important to our country.

'It is love that will save our world'