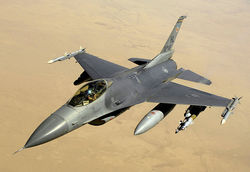 Egypt -- where a popular uprising that began last week seeks the end to President Hosni Mubarak's 30-year rule -- is the second-largest recipient of U.S. foreign aid after Israel.

The Egyptian government receives about $2 billion a year from the United States, with most of that assistance going to its military. Last year the U.S. sent about $1.3 billion to Egypt's military compared to about $250 million in economic aid, and the Obama administration requested similar amounts for the 2011 fiscal year, as Britain's Telegraph reports.

The U.S. has long made the case that its unconditional funding for Egypt strengthens relations between the countries and provides benefits for the U.S. such as expedited processing for U.S. Navy warships sailing through the Suez Canal.

Indeed, one of the diplomatic cables released by WikiLeaks noted that "President Mubarak and military leaders view our military assistance program as the cornerstone of our mil-mil relationship and consider the USD 1.3 billion annual FMS as 'untouchable compensation' for making and maintaining peace with Israel."

Last week White House Press Secretary Robert Gibbs said the Obama administration would be reviewing its assistance to the Egyptian government based on events over the coming days.

Obviously any change in U.S. aid policy would have important ramifications for Egypt. But it could also have implications for the U.S. companies that contract with the Defense Department to provide good and services to the Egyptian military -- and for their workforces and communities.

Facing South reviewed the Department of Defense contract database over the past two years to see what deals are already in place, and discovered many contracts with connections to the South. The following are the 10 biggest contracts involving aid to Egypt in that period.

2. DRS C3 and Aviation -- Horsham, Pa. In December 2010, this subsidiary of the Italian company Finmeccanica received a $46.1 million Army contract to provide vehicles, hardware and services for Egypt's border surveillance program. That same month DRS landed another $19.6 million Army contract to provide surveillance hardware and services for the Egyptian government.

3. L-3 Communication Ocean Systems -- Sylmar, Calif. and Garland, Texas. The company's Sylmar operations completed a $24.7 million deal with the Navy last August to provide a sonar system for the Egyptian Navy. And in April 2009, L-3's EOS Division in Garland, Texas got a $6.6 million Army contract to provide Egypt with military imaging equipment.

5. Boeing -- Mesa, Ariz. and St. Louis. Last May, the aerospace firm landed a $22.5 million Army contract to provide Egypt with 10 Apache helicopters. The month before that, the company's St. Louis operations won a $5.8 million Navy contract to provide logistics support for other governments, with $262,530 of that designated for assistance to Egypt.

6. Raytheon -- Tucson, Ariz. and Andover, Mass. The weapons and electronics firm received a $26 million Navy contract in June 2009 to provide 178 Stinger missiles to both Egypt and Turkey. This past December, it finalized a $5.6 million Army contract to provide Hawk missile system technical assistance to the Egyptian government.

7. AgustaWestland -- Reston, Va. In November 2009, the Navy made definite a previously awarded $17.3 million contract for the company -- a subsidiary of Italy's Finmeccanica -- to provide helicopter maintenance for the Egyptian government.

8. US Motor Works -- Cerritos, Calif. and Grand Prairie, Texas. The company got a $14.5 million Army contract in June 2009 to provide engines, components and spare parts for vehicles acquired for the Egyptian Armament Authority, with most of that work to be done in Texas.

9. Goodrich Corp. --- Chelmsford, Mass. In October 2010, Goodrich landed a $10.8 million Air Force deal to procure and deploy reconnaissance systems for use on the F-16 fighter jets purchased by the Egyptian Air Force.

10. Columbia Group -- Washington, D.C. In June 2009, the defense contractor completed a $10.6 million contract with the Navy to provide remotely operated vehicle systems as well as technical support and training to the Egyptian Navy, with most of the work to be performed out of the company's Panama City, Fla. operations.

Many other companies with recent deals related to Egypt have operations in the South as well. They include Michelin Aircraft Tire of Greenville, S.C.; Wyle Laboratories, Camber Corp. and Summa Technology, all of Huntsville, Ala.; WRSystems Ltd. of Fairfax, Va.; TASC of Chantilly, Va.; and Clayton International of Peachtree City, Ga.

For a full listing of Defense Department contracts awarded over the past two years for work related to Egypt, click here.