Skip to main content
Join the voice for a changing South.
Donate Today
By Sue SturgisMarch 10, 2011 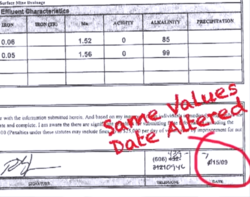 Environmental watchdogs are taking yet another coal mining company to court over massive violations of the federal Clean Water Act in Kentucky, raising questions about the state's ability to oversee the industry effectively.

Nally and Hamilton Enterprises received notice [pdf] yesterday that it's being sued for more than 12,000 violations of the law at more than a dozen of its operations across seven eastern Kentucky counties. The alleged violations involve the repeated filing of false and potentially fraudulent pollution monitoring data with state agencies since 2008. The charges can bring jail time as well as up to $400 million in fines.

On numerous occasions Nally and Hamilton submitted reports to the state in which all discharge data for a certain monitoring site in a given month repeated exactly the same data from previous months. That suggests the company was simply re-submitting earlier pollution data rather than doing the regular testing required by law -- the third coal company charged with such actions in Kentucky in the past five months.

"These cut-and-paste reports are obviously false," said Aaron Colangelo, an attorney with the Natural Resources Defense Council, which is suing the company on behalf of Appalachian Voices, Kentuckians for the Commonwealth, Kentucky Riverkeeper and the Waterkeeper Alliance under the Clean Water Act's citizen lawsuits provision. "This shows a complete lack of care and concern about Kentucky's rivers and streams and the health of its citizens."

Nally and Hamilton is Kentucky's fourth-largest producer of coal from surface mines, which include mountaintop removal operations. The action against the Bardstown, Ky.-based private company comes five months after the same environmental groups announced their intention to sue the state's top two producers of surface-mined coal for a similar pattern of violations.

The problems came to light last year after the Riverkeeper team at North Carolina-based Appalachian Voices launched Appalachia Water Watch to examine water quality impacts from Kentucky's coal mining industry. That involved a visit to the London, Ky. office of the state Department of Surface Mining and Enforcement, where the team was startled by what it found.

"We discovered that many discharge monitoring reports were piled in dust-covered stacks and had not been reviewed for compliance by regulatory officials for many years," reports Donna Lisenby, the Upper Watauga Riverkeeper with Appalachian Voices. "We blew the dust off those DMRs and found more violations of the Clean Water Act than I have ever seen in my 13-year history of being a Riverkeeper."

Last October, the watchdogs filed a 60-day notice of intent to sue International Coal Group of West Virginia and Frasure Creek, a subsidiary of West Virginia's Trinity Coal, which in turn is owned by India's Essar Group. The action cited the discovery of some 20,000 violations that involved the same pattern of identical data submitted month after month over a period of years.

On the 57th day of the notification period, the Kentucky Energy and Environment Cabinet attempted to pre-empt the advocates' legal action with a settlement charging the companies with just over 2,700 violations and combined fines of just $660,000 -- less than one-tenth of 1 percent of the maximum fines possible under the Clean Water Act.

The citizen watchdogs then filed a motion to intervene in the settlement, arguing that the state failed to adequately address the violations or deter future wrongdoing. A state judge granted the groups limited rights to intervene -- the first time a third-party intervention has been allowed in a state proceeding between a potential Clean Water Act violator and a Kentucky agency.

At that point, Frasure Creek along with the Cabinet requested emergency relief from the courts in order to block the watchdogs' intervention. A state appeals court denied the emergency request, though the appeal is still pending with a hearing set for June 14.

The citizen groups were disappointed to see Gov. Steve Beshear's (D) administration repeatedly take the industry's side over the public interest. But it's precisely because of that phenomenon dubbed "agency capture" that that the Clean Water Act included a citizen lawsuit provision to bring lawbreakers to justice, notes Waterkeeper Alliance President Robert F. Kennedy, Jr.

To illustrate why the provision is so critical, Kennedy asks us to think about a child who's learning to read in a Kentucky schoolroom and discovers she can't keep up with her classmates -- not because she doesn't have the God-given ability but because she was exposed to neurotoxins like mercury and lead from the mine pollution contaminating her drinking water.

"Nally and Hamilton took that capacity away from her," he says. "Why is that a lesser crime than robbing a bank or stealing from a store?"

(Image of an altered coal company discharge monitoring report is a still from an Appalachian Voices video about the citizen lawsuits.)