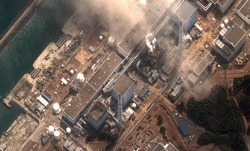 With the nuclear crisis in Japan growing more alarming by the hour, Duke Energy CEO Jim Rogers appeared before the North Carolina Utilities Commission yesterday to ask for permission to spend an additional $267 million for the planning of two new reactors at its Lee plant in South Carolina. If approved, the request would bring the amount Duke will pay for pre-construction work there to $459 million -- money it's expected to seek to recoup from ratepayers.

Rogers downplayed the impact that the dire situation at the Fukushima plant (photo above) is having on his company's plans, pointing to a report issued this week by Moody's Investors Service that identified "limited ratings implications" for most big companies and banks operating in that country.

However, he acknowledged that the Japanese disaster has already produced political fallout for Duke Energy that could have a long-term impact on the viability of the Lee project and other nuclear construction in North Carolina.

At the same time Duke has been pursuing more planning funds for the Lee reactors, it and potential merger partner Progress Energy have been pressing for North Carolina legislation making it easier for companies to raise customers' rates to finance new construction. Progress Energy has also been considering plans to build two new reactors at its Shearon Harris plant near Raleigh, N.C. Neither of those projects is among the top finalists for the $54 billion in federal loan guarantees that the Obama administration is offering for new reactors.

The legislation would revamp the state's existing construction-work-in-progress (CWIP) law allowing utilities to raise rates to pay for plants before they're built by allowing the companies to do so without public rate hearings -- a policy that opponents have dubbed "super CWIP." Rogers said the legislation is essential to moving forward on the Lee project, since otherwise his company would have to pursue time-consuming annual rate cases to finance the work given the unwillingness of banks and investors to take on the risk of new reactors.

Rogers told the commissioners that he expected the legislation to be introduced this week, but that it's "not the right time now."

In response, commission chair Ed Finley said that if Duke doesn't get the legislation it wants, "at some point you have to stop incurring development costs."

"I just believe that there will be legislation," Rogers answered. "If the legislature says no, they're saying no to nuclear's future in this state."

Rogers' confidence that the legislature will do the bidding of Duke and Progress is not surprising, considering the enormous power [pdf] the utilities have in the General Assembly thanks to their generous campaign contributions and army of lobbyists.

The Raleigh News & Observer reports that the lawmaker expected to introduce the super CWIP legislation is Sen. Tom Apodaca, a Republican representing Buncombe, Henderson and Polk counties in western North Carolina. Apodaca received $16,000 in campaign contributions from Duke and Progress in the most recent election cycle, making the utilities one of his top contributors, according to the National Institute on Money in State Politics.

The utilities argue that the streamlined cost recovery law will save customers money in the long run. However, the payment scheme remains highly controversial, with a recent poll [pdf] finding that 70 percent of North Carolina voters oppose it.

In addition, a conservative Republican lawmaker from Florida recently wrote a letter to North Carolina's Democratic Gov. Beverly Perdue warning her of what a bad deal CWIP turned out to be for his state's residents. Average customers there can expect their power bills to jump by $50 a month by 2020 to pay for new reactors at Progress Energy's Levy County plant. South Carolina and Georgia have similar cost recovery laws.

Also making the case against "super CWIP" is Peter Bradford, a former member of the U.S. Nuclear Regulatory Commission and former chair of the utility commissions in Maine and New York. He testified before Rogers during yesterday's proceedings and called on commissioners to deny Duke's request to collect more planning money from ratepayers, arguing that it was unfair to force the state's consumers to bear costs amounting to additional hundreds of dollars per family. Consumer advocates have estimated that super CWIP could ultimately result in rate hikes of as much as 50 percent for Duke's customers -- money that those customers would not get back should the reactors ultimately not be built.

"Duke is seeking to transfer risks from its shareholders to its customers," Bradford said In an interview prior to the hearing. "It takes chutzpah to claim they're saving customers money."

A dozen North Carolina residents spoke during the hour-long public comment session that opened yesterday's hearing, with all of them opposing Duke Energy's request, and most opposing nuclear power in general. Some speakers mentioned Congressman Ed Markey's (D-Mass.) recent letter to the Nuclear Regulatory Commission -- sent before the Japanese disaster -- that raised questions about the safety of the AP1000 reactors being planned for the Lee site and six other sites in Alabama, Florida, the Carolinas and Georgia.

Among the speakers was Beth Henry, a residet of Charlotte, N.C., where Duke Energy is headquartered. She told of the financial hardships she and her husband already face in caring for her disabled sister as they near retirement and life on a fixed income. She referenced with skepticism Rogers' recent calls for "purpose-driven capitalism" in which businesses serve more than just their shareholders.

"How can Mr. Rogers tout 'purpose-driven capitalism' with a straight face?" Henry asked. "Capitalists earn returns by beating the competition and taking risks. Duke has no competition. Here and in the legislature and Congress Mr. Rogers seeks to have his company protected from all risk. That is not capitalism; it is a forced transfer of wealth to the investor class from working-class, middle-class and poor people."

The commission is expected to hand down its decision on Duke Energy's request in the next six months. Meanwhile, the company is expected to file for a rate hike in June, with some observers expecting that to include the Lee pre-development costs.

(Photo of fire at the Fukushima nuclear power plant by Digital Globe.)