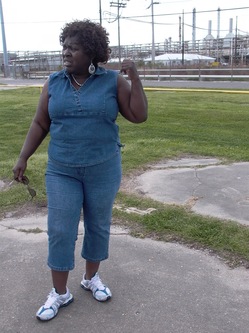 The environmental destruction caused by Louisiana's oil industry did not begin with the BP disaster, and a visit to the town of Norco 25 miles west of New Orleans powerfully illustrates that reality.

Built on land adjacent to the Mississippi River that once supported vast sugar plantations, the town is named for the New Orleans Refining Co. that opened there in 1911 and was bought by Shell Petroleum Co. in 1929. Today Norco is home to about 3,500 people and six major oil refineries and petrochemical plants that in 2009 alone reported releasing more than 1.1 million pounds of highly toxic pollution to the air.

Among those heavily polluting facilities is the Shell Chemical plant. Once much smaller, the plant expanded in the 1950s right to the edge of segregated Norco's African-American neighborhood of Diamond. Residents were plagued by terrible odors sometimes resembling rotten eggs, permanent markers, or sickly-sweet maple syrup. At the same time, the plant's good jobs went to whites who lived further away from the facility's fence line, with those blacks that were hired there relegated to low-level jobs.

Then in 1973, an explosion sparked by someone starting a lawnmower above one of the plant's leaking underground pipelines killed two people. That led Diamond's residents -- many of them elderly women -- to begin picketing outside the facility and demanding that Shell relocate them. They eventually formed a grassroots group called Concerned Citizens of Norco to press their case.

"When Miss Helen and that boy blew up, that was the deciding thing," recalls Iris Carter (in photo), who was born in Diamond in the early 1950s and has deep family roots in the area, which also happens to be the site of an 1811 slave revolt that was the largest in U.S. history.

Carter got involved with Concerned Citizens and today is a board member and activist with the Louisiana Bucket Brigade, a nonprofit environmental health advocacy group that began working with the Diamond community in 1999. The Bucket Brigade trained community members to document Shell's pollution and helped them win media attention for their struggle.

In 2002, Shell finally agreed to buy out Diamond residents, who had grown so rattled by the plant's frequent accidents that they took to sleeping fully clothed in case they had to flee in the night. Of about 200 families that once called the community home, only about 20 remain today, their houses scattered among open fields.

But the relocation was a hollow victory for Carter and others who took the buyouts. Though Shell once talked about purchasing a tract of land and moving the entire community together, that never happened. Instead, people scattered to various places. Friends and families were torn apart.

The years of toxic exposures have also taken a toll on residents' health. Carter has been diagnosed with environmentally-related asthma, and her daughter is also an asthmatic. Carter's mother died of cancer, and one of her sisters died of the autoimmune disease scleroderma -- two illnesses disturbingly common among people from Diamond. Another sister is currently being treated for a rare blood cancer.

"We didn't know it was dangerous," she says. "Sometimes what you don't know can hurt you."

(Photo of Iris Carter next to the Shell Chemical plant in Norco, La. by Sue Sturgis.)