Skip to main content
Join the voice for a changing South.
Donate Today
By ProPublicaMarch 21, 2011 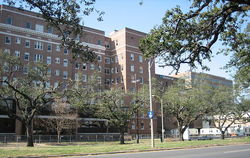 By Sheri Fink, ProPublica, co-published with the New York Times


A jury trial set to open today will weigh whether one of America's largest health care corporations should be held accountable for deaths and injuries at a New Orleans hospital marooned by floodwaters after Hurricane Katrina.

The class-action suit is expected to highlight desperate e-mail exchanges, not previously made public, between the hospital and its corporate parent.

"Are you telling us we are on our own and you cannot help?" Sandra Cordray, a communications manager at Memorial Medical Center, which sheltered some 1,800 people, wrote to officials at the Tenet Healthcare Corporation's Dallas headquarters after begging them for supplies and an airlift.

The suit, brought on behalf of people who were at the hospital during the disaster, alleges that insufficiencies in Memorial's backup electrical system and failed plans for patient care and evacuation, among other factors, caused personal injury and death.

The complaint also focuses attention on the lack of comprehensive emergency preparedness requirements for the nation's hospitals. Proposed regulations aimed at addressing "systemic gaps" identified after Katrina were scheduled for release by the federal Centers for Medicare and Medicaid Services in January, but have been delayed. President Obama's budget proposal trims spending on a national hospital preparedness program by $42 million, or about 10 percent from current levels.

The bodies of 45 patients were discovered at Memorial Medical Center after the August 2005 storm, far more than at any other hospital, and some doctors subsequently acknowledged that they had injected patients with drugs to hasten their deaths. No criminal charges were brought. Last year, a relative of a patient who died filed a civil claim of euthanasia against a Memorial doctor. It was dismissed and is on appeal.

Staff members at Memorial said they did their best in the face of inhuman conditions.

"The doctors didn't create that environment. The hospital created that environment," said Joseph M. Bruno, one of the lead lawyers for the class-action plaintiffs. He said no physicians had opted out of the class and some might testify at trial in New Orleans.

The hospital and Tenet deny the allegations.

"We are confident that in the end, the evidence will show that Memorial Medical Center and its staff and physicians acted heroically in the face of such a tragic situation," Rick Black, Tenet's director of communications, said in a statement.

Lawyers for Tenet and Memorial have lined up experts to testify that the city's failed levees, a chaotic government response and the huge hurricane are what created the deadly environment. Plaintiffs' lawyers have moved to exclude all such evidence from consideration, arguing that it is irrelevant to the duty the hospital had to its patients.

One issue almost certain to figure in the trial is the extent to which executives at Memorial and other hospitals understood the possible dangers of flooding. It has been previously reported that Memorial did not act on a 2004 recommendation to move components of its electrical system above the ground floor. New documents raise questions about whether design, maintenance or other factors led to the total failure of backup power after the floodwaters rose.

Even before all power was lost, Memorial's air-conditioning shut down, by design. American hospitals are required to maintain emergency power systems, but they do not have to support air-conditioning or heating.

According to employees, temperatures inside Memorial soon rose to over 100 degrees, threatening older patients in particular. Among them was 70-year-old Leon Preston, an amputee who died at Memorial and whose family's case is part of the lawsuit.

Memorial's hurricane plan assumed that backup power would function for a minimum of three days, but the system failed in less than two.

At least some hospital employees were aware that the system would be at risk in a flood. Memorial's director of plant operations learned from the Army Corps of Engineers in 2004 that the hospital could be surrounded by 12 to 15 feet of water after a major hurricane. The director, Eric Yancovich, who also served as safety officer, recommended raising basement and ground-level emergency power transfer switches and the pumps that supplied most of the hospital with medical air and vacuum suction -- needed by patients with respiratory problems

A partial bid for the electrical work came to more than a quarter of a million dollars. "Due to the lack of capital, I don't anticipate anything being approved right now," Mr. Yancovich concluded in a memo to his supervisor. "I'll keep it on file for future consideration."

Given these vulnerabilities, the hospital should have warned patients and visitors away before the hurricane, according to Mr. Bruno, the plaintiffs' lawyer. "Fundamentally, they could have told their patients: 'It's not safe for you. Go.'"

The New Orleans mayor's pre-storm evacuation order for Katrina specifically exempted hospitals, even though a 2002 poll by the city's health director revealed deficiencies in generators and evacuation plans for flooding. Hospital evacuations are costly and risky, and hurricanes often change course. According to the minutes of a statewide hospital emergency conference call held the day before landfall, nearly all hospitals had either generators, electrical switches or both at ground level, yet they chose not to evacuate.

An expert hired by the plaintiffs, Jerry Watts, concluded that the floodwaters shorted out Memorial's electrical transfer switches and many distribution panels, much as the plant operations director had predicted. However, Gregory Gehrt of ccrd Partners, an expert hired by Tenet, attributed the power shutdown to mechanical problems in the hospital's three 750-kilowatt diesel generators, which were located well above the water.

Codes and standards require only that potential for flooding be given "careful consideration" in electrical-system design. Hospital generators must be tested monthly, but for short periods, unlike what would be needed in a major disaster.

A central question likely to be raised at trial is why Tenet did not try to hire private helicopters immediately after Ms. Cordray's call for help. A vice president of the Federation of American Hospitals also appealed to Tenet for medevac resources that day, saying that Senator Mary Landrieu's office was "begging us to help them fill in emergency rescue gaps in Louisiana."

Tenet officials have said publicly that they did not hire private helicopters until the following day, after emergency officials told them that Memorial was low on the state's evacuation priority list and that they would need to use private resources to get patients out quickly. Before that, they said, emergency officials told Tenet that Federal Emergency Management Agency and National Guard troops were coordinating hospital evacuations, and that it would not be possible to get into the city.

Tenet corporate headquarters did not have an emergency command system in place and established one as the disaster unfolded. Company officials lobbied hard to get federal rescuers to prioritize Memorial, warning that dozens of patients were in danger of dying. Ultimately, the company spent more than $1 million on airplanes, buses, ambulances and security personnel to support its six hospitals in the region, a portion of which was later recovered from insurance.

The Tenet Healthcare Corporation has since sold Memorial and its other Louisiana hospitals. Tenet bills itself as one of the largest publicly owned health care companies in the country, listing operating revenues of $9.2 billion in 2010. Tenet's 49 hospitals in 11 states counted more than a half-million patient admissions that year, and its outpatient centers treated nearly four million. Tenet's corporate structure includes more than 400 subsidiaries.

Claims were also made against Lifecare, a separate health care company that leased space at Memorial to operate a long-term acute-care hospital, many of whose patients died awaiting evacuation. It reached confidential settlements with all but one plaintiff and is not a defendant in the class-action suit.

(Photo of Memorial Medical Center after Katrina by Infrogmation via Wikipedia.)