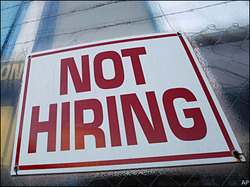 You would never know it from the preoccupation with budget deficits and the attack on public unions, but there is still a severe jobs crisis in the United States.

The focus on the state and federal fiscal situation has deflected attention from what should be a major scandal: the failure of big business to accelerate hiring in step with the emerging recovery in overall economic activity.

In recent weeks the dimensions of that scandal have become increasingly apparent as corporations report lush earnings for 2010 while hiring remains depressed. To highlight this incongruity, I looked at the top 50 companies on the most recent Fortune 500 list. Twenty-nine of them have recently reported their annual profits while also disclosing the size of their payroll as of the end of the fiscal year.

On the earnings side, it is truly fat city. The 29 posted aggregate net income of $239 billion, a whopping 48 percent increase from the year before. Oil companies, of course, are raking it in. Exxon Mobil was up 58 percent and Chevron 81 percent. Service sector giants are also reporting much richer bottom lines. UPS showed an increase of 62 percent and AT&T 63 percent. Some blue chip industrials more than doubled their earnings. Boeing soared 152 percent and Ford Motor 141 percent.

By contrast, the employment figures are pitiful. Together, the 29 corporations reported a decline of about 3,500 positions in their aggregate head count of some 4.6 million. While most of the companies showed little change -- and some banks increased their hiring a bit -- a few of the corporate giants slashed payrolls. Telecommunications behemoth Verizon Communications reduced its workforce by 28,500 jobs while boosting its profits more than 13 percent. General Electric, whose CEO Jeff Immelt is advising the Obama Administration on job creation, got rid of 17,000 net positions during 2010 while enjoying a 6 percent rise in earnings. (GE is one of the few companies that provide a geographic breakdown of their workforce. In the U.S. GE's head count was down by 1,000.)

Given these numbers, why is big business facing little criticism for its hiring freeze? There is a tendency to regard even large corporations as helpless in the face of economic conditions, and they are not expected to resume hiring until the market mandates it. Yet the overall economy is picking up and still there is a resistance to hiring.

Corporate apologists such as the U.S. Chamber of Commerce would have us believe that the reason is excessive workplace regulation. The Chamber has just come out with a report making the preposterous claim that if state governments would only curtail their employment rules to the lowest common denominator, 746,000 new jobs would magically materialize.

A major reasons hiring is anemic is that workplace rules -- and union presence -- are too weak rather than too strong. Companies can do more business and garner more profits without increasing their head count largely because there is nothing stopping them from squeezing more work out of the same number of employees. Stricter protections and more collective bargaining would result in higher employment levels.

One of the favorite policy prescriptions for high joblessness is to offer tax credits to companies to hire more people. The existence of those programs at the state and federal levels is, however, contributing little to job creation.

Rather than thinking up more incentives, perhaps we should create a disincentive for corporations to continue their hiring boycott. There is a growing awareness these days that big business is not paying its fair share of taxes. We could begin to address this problem by creating tax penalties for profitable companies that refuse to use their earnings to alleviate understaffing.

Pressuring corporations to do more hiring would not only improve life for the overworked employed and reduce the ranks of the unemployed. The additional tax revenue that comes in -- whether from the penalties or the withholding paid by the newly hired -- would also alleviate the state and federal fiscal crunch and make it easier for us to ignore those who insist that cutting the size of government is the solution to everything.