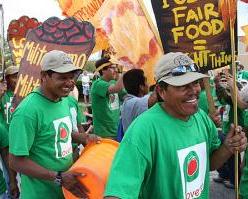 Thousands of Florida tomato pickers and their supporters marched in front of supermarkets up and down the East Coast this spring, demanding that big corporate buyers use their purchasing power to improve wages and working conditions in the fields.

The Coalition of Immokalee Workers and its student, faith, and fair-food allies have seen banner victories in the last year, signing agreements with fast food chains and an unprecedented deal with the Florida tomato growers' association after a decade of campaigning.

The next domino they hope to line up is the grocery market, led by chains like Stop and Shop and Publix. These companies, like so many before, are hiding behind the excuse that they don't control prices. A Publix company representative went a step further, saying "it's not our business" to stop the atrocities in American agriculture.

The horrific conditions in Florida's fields are well documented. In addition to the killing work pace resulting from low-wage piecework, the CIW has uncovered seven cases of outright slavery involving more than 1,000 workers in the last decade.

If the grocery chains step up, they have the chance to fit into a carefully negotiated system to boost wages and ensure better conditions in the fields.

Who sets the standards?

Farmworkers say the huge corporations that dominate the food industry are responsible for setting standards. And because the workers have already extracted agreements from the growers association, they want the supermarkets to do their part by signing agreements that would guarantee farmworkers one more penny per pound of tomatoes--almost doubling their pay.

The supermarkets would also agree to a transparent monitoring system, and demand adherence to a code of conduct to improve working conditions in the fields, CIW says.

But Publix in particular has stood out for its refusals. The company released a long list of arguments why it couldn't pay the extra penny per pound, prompting the CIW to post a biting take-down of the company's errors and omissions this week.

"Publix refuses to meet with the CIW to discuss the actual mechanism for the penny-per-pound payment," the farmworkers' group said. "If they did, perhaps they would understand it better."

Florida is responsible for about 90 percent of the tomatoes grown in the U.S. between October and June.

CIW challenged the supermarkets in a week-long "Do The Right Thing" tour this spring, starting in Boston and ending in Tampa, Florida. Along the way CIW rallied at Stop and Shop (a subsidiary of the Dutch company Ahold) in Boston, Trader Joe's in New York, Giant Foods (also Ahold) in Baltimore, and Publix in Atlanta.

The tour culminated in 1,500 activists marching through the streets of Tampa in a fiery picket and rally filled with worker testimonies, artistic signs and banners, and music. Religious and student support anchors the coalition's community campaigns.

"One congregation mailed off all their Publix store receipts to the corporate offices, threatening to cease patronizing Publix stores unless the company agrees to do the right thing," said Lucas Benitez, a farmworker and CIW leader.

The CIW signed a landmark agreement with the Florida Tomato Growers Exchange in November that covers 90 percent of Florida's tomato fields.

For the first time, many farmworkers in Florida have a reliable mechanism to ensure proper payment for hours worked, as well as a grievance procedure to address abuses or violations of the code of conduct, a participatory health and safety program, and a worker-to-worker education process aimed at ensuring that farmworkers themselves are active participants in efforts to improve conditions.

Santiago Perez, a farmworker in Immokalee for seven years, says the improvements have been immediate. He noted that field bosses used to make them fill buckets past the top--extra tomatoes they weren't paid for. Now they just fill to the line.

"Before, if a worker had a complaint of any kind it would usually mean immediate dismissal," Perez said. "But now we feel like we can stand up for our rights without fear of losing our jobs."

Ahold USA claims to source its tomatoes ethically from growers who are cooperating with the CIW. But Ahold has not agreed to pay the extra penny per pound, nor has it agreed to condition its tomato purchases on compliance with the code of conduct.

One new wrinkle in the CIW's supermarket campaigns is the potential to work directly with unions at the stores. Workers at Stop and Shop and Giant stores are represented by the Food and Commercial Workers.

"We feel strongly that workers' rights are indivisible--whether it be in the fields or in the stores--and support their efforts to win fair wages and working conditions," said CIW staffer Greg Asbed.