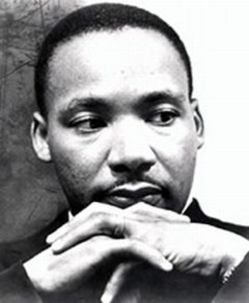 Martin Luther King's final public remarks, delivered 43 years ago yesterday, are often called his darkest, because he appears to foreshadow his assassination the following day.

He was in Memphis, Tenn., urging supporters of 1,300 striking sanitation workers to double-down at a critical juncture in what had been a troubled movement--a previous demonstration had turned violent, embarrassing King, and he was preparing a new march in defiance of court orders. He closes the speech by musing at length on the death threats he'd received:

Like anybody, I would like to live a long life. Longevity has its place. But I'm not concerned about that now. I just want to do God's will. And he's allowed me to go up to the mountain. And I've looked over and I've seen the Promised Land. I may not get there with you, but I want you to know tonight that we, as a people, will get to the Promised Land.

Decades later, we have not yet arrived.

Many have noted that King was slain as he fought for the very rights Republicans in Wisconsin, Ohio, Indiana and a growing number of other states now seek to nullify, and rallies around the country today will highlight that fact.

But King's battle was both broader and more specific than the rights of public sector workers. Rather, King lent his celebrity to the black men who labored in Memphis' refuge, for wages that left them in poverty, because they symbolized a global economy built upon exploiting black and brown people.

King was gearing up a national movement to dramatize black America's deep poverty--and to explain why that poverty would ultimately destroy the whole country. That movement would sadly have plenty of evidence to prove its point today.

Two and a half years into the global economic collapse, the policy makers and bankers who brought us here have moved on. The White House celebrated better than expected job numbers Friday with certainty that the administration's self-declared hard choices have finally been vindicated, just in time for the president to announce his re-election campaign.

The big banks are larger and more profitable than ever. And the business press has returned to its pre-recession role as cheerleader for an economic growth that depends upon historic worker productivity while benefiting only the very few at the top of the economy.

And yet, all around us lies the destruction that inequity generates, and that will continue to undermine this country's future.

You needn't look further than Friday's supposedly triumphant jobs report. While the economy added jobs and overall unemployment continued inching downward, among African Americans the jobless rate increased, likely as the cheery news of recovery convinced longtime unemployed black workers to resume their fruitless search for work. The black unemployment rate is now 15.5 percent, approaching double that of the overall rate of 8.8 percent.

That's a jobs crisis that has lingered since the 2001 recession, actually, from which black workers never recovered. Black joblessness never returned to 1990s levels, and as families worked harder to make less they turned more and more to predatory credit to make ends meet.

That predatory credit is, of course, what destroyed the overall economy in the first place, as Wall Street found record profits in selling off the toxic subprime loans that so disproportionately saturated black neighborhoods. The foreclosure crisis followed, with black and Latino families at its center.

Today, there is no hopeful-sounding foreclosure data to celebrate, so the White House has taken a page from the right's playbook: declare your effort a success and, facts to the contrary notwithstanding, keep it moving. Back in 2009, the White House ignored the urgings of just about everyone not lobbying for the banks and built a foreclosure relief program that was entirely voluntary for mortgage servicers. Lo and behold, few homeowners have gotten the help they were promised.

In a scathing New York Times op-ed last week, the outgoing special inspector overseeing the 2009 bank bailout, Neil Barofsky, spelled out how both the bailout and the foreclosure program was built around the needs of the banks rather than the people who it was supposed to help. Barofsky argued that the Treasury Department's failure to stop foreclosures

[W]hether born of incompetence, timidity in the face of a crises or a mindset too closely aligned with the banks it was supposed to reign in--may have so damaged the credibility of the government as a whole that future policy makers may be politically unable to take the necessary steps to save the system the next time a crisis arises.

Of course, broad swaths of the country aren't far enough out of the current crisis to talk about a next time. A quarter of black families live in poverty. Indeed, a record number of American families overall were in poverty in 2009. A record number went hungry as well.

And for young people of color--the country's demographic future--the next crisis is baked in. Black college graduates are out of work at twice the rate of their white peers--roughly 15 percent can't get a job--and are simultaneously mired in disproportionate student loan debt. That means they are entering the workforce--or, hope to one day, anyway--in exactly the position that left so many of their parents vulnerable to deceptive subprime loans.

At the same time, millions of immigrant youth can't get the college education for which they qualify academically because they don't qualify for financial aid at all. Despite spending their lives in the United States, building communities and families and generally doing all the things citizens are supposed to do, they don't have the paperwork to get the rights of citizenship. So they can't go to school.

That's just fine by all the business owners who would prefer those young people instead join the millions of undocumented workers who labor away, generating our economy's growth, with no rights.

There is no shortage of solutions for all of this--they have been discussed and dissected at length since at least the summer of 2008. The policy choices are at this point plain. What we are lacking is the moral and political courage King called upon on April 3, 1968. "We have been forced to a point where we are going to have to grapple with the problems that men have been trying to grapple with through history, but the demands didn't force them to do it," he declared.

While the speech is remembered for its prescience of martyrdom, it's equally striking for its radical calls to action. King tells black people to pool their economic power and withhold it, and he names Coca-Cola, Wonderbread and Sealtest milk as initial boycott targets, because of their hiring practices. "Up to now, only the garbage men have been feeling pain," King explains. "Now we must kind of redistribute the pain."

He calls for a "bank-in," in which the community withdraws all its money from the mainstream banks and instead puts it in the local savings and loan. He points to six black-owned insurance companies in Memphis and urges the community to direct its business to them instead of the corporate firms that support an economy that keeps black people in poverty. The march itself is in defiance of what he calls an "illegal, unconstitutional injunction" from the court, and he urges everyone to skip both work and school to join him in breaking the law, for the purpose of showing the law's immorality.

Obama officially launches his campaign for re-election today. He'll be urging the millions of people who supported him to once again pool their time, money and energy--both physical and emotional--to return him to the White House next fall. I'll set to the side whether the question of whether he's earned such support, or whether there's any better option.

But perhaps, before we all invest so singularly in an electoral process that has thus far proven to offer so little change, we explore an investment like the one King called for en route to his death. Maybe we first need the sort of radical and sustained challenge to the political system that he prescribed.

Kai Wright is editorial director of Color Lines at the Applied Research Center. An earlier version of this piece appeared at Colorlines.com.

Dr. King's 'I Have A Dream' speech was born in North Carolina