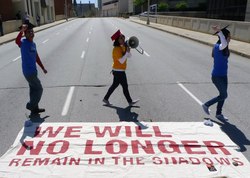 "They have done a marvelous job with it," said state Senator Renee Unterman, praising her sheriff for putting immigrants into deportation proceedings using the 287(g) program. Under a 287(g) agreement, the federal government deputizes local law enforcement to act as immigration agents.

"When I drive down the street, I don't see as many people who are foreign. They've scattered. They're terrified, and that's good."

Senator Unterman urged her fellow legislators to pass HB87, authorizing local law enforcement throughout Georgia to act as immigration agents. While the 287(g) program has been good for her county, she argued, the "foreigners" are just packing up and moving across the county line. Unterman's message was clear:  HB87 will drive "foreigners" out of Georgia the way 287(g) has driven them out of her county.

Unterman's anxiety over the browning of Georgia comes from firsthand experience. She represents Gwinnett County, a county that was overwhelmingly white when Unterman was mayor of Loganville in the late eighties. By the time Unterman was elected to the state senate in 2002, Gwinnett County's white population had dropped to 67% of the total. Today, whites are in the minority. Latino and Asian immigrants, plus African Americans, today make up 51% of the county's population.

Unterman's Republican colleagues, perhaps seeing Gwinnett County's abrupt demographic shift as portent, voted to pass HB87. The bill now goes to the governor, who has until May 24 to sign. Unless he vetoes, the bill becomes law.

And then immigrants -- the "foreign" looking ones, at least -- scatter, leaving the state in droves. The threat of a 51% people of color state passes. That is the Republican-dominated legislature's intent.

Then again, Republican legislators could be in for a surprise.

If the size and energy of rallies against HB87 over the past few months is an indication, the rising volume of anti-immigrant rhetoric seems to have roused Georgia's immigrants and allies. Undocumented youth in particular are reacting to the crackdown not by running away but by insisting on their right to remain. When seven undocumented students stopped traffic in downtown Atlanta on April 5, they did so by setting down a banner that read "We will no longer remain in the shadows."

The youths' courage is contagious. Dozens of undocumented people joined a vigil last week outside the Georgia Capitol building on the last day of the session, as legislators debated HB87. The bill passed at 10:15 p.m., when the vigil was already in its fifth hour. Xochitl Bervera of SomosGeorgia gave the bad news to the crowd.

There were three seconds of silence.

Then a voice yelled out, loud and clear: Aqui estamos! The crowd answered: Y no nos vamos!  The chant -- we are here, and we're not leaving -- made it clear that something has shifted. It may be that the passage of HB87, designed to drive people out, will turn out to be the moment when people decided to stay and fight.

Florida activists show how to fight anti-immigrant legislation and win

A trend toward anti-immigrant, anti-choice laws