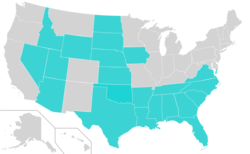 Twelve state legislatures are seeking to pass right-to-work bills, which allow workers to get the benefits of union representation without joining or contributing. That weakens the union's ability to advocate, eventually hurting the whole workforce -- including those who thought they could get a free ride.

Right to work came to Louisiana in 1976 and drastically changed my family's work for the worse. I am a third-generation member of the Operating Engineers, Local 406 in Lake Charles. My grandfather, great-uncle, father, brother, cousins, and I have all worked in the heavy equipment industry. While previous generations ran a wide range of equipment (dozers, draglines, and cranes), my father, brother, and I have only worked with large, heavy-lift cranes.

My grandfather landed on Omaha Beach in the 1944 D-Day invasion and operated cranes that rebuilt the bridges across the major rivers of Western Europe. After returning from the war, he continued as a union Operating Engineer for the next 40 years. On my grandfather's income from a mostly regular 40-hour work week, he and my grandmother were able to raise a family and take yearly vacations.

I am not trying to paint a rosy picture of my grandfather's work. This was before the days of air-conditioned crane cabs and computerized safety systems. The folks who ran equipment in the 1950s through the 1970s could expect to work hard and return home dirty.

However, they could generally count on taking a break at the end of the week. Working overtime or weekends meant extra money on the paycheck. If an operator wanted to save up for a purchase or vacation, he could choose to work overtime when extra hours were available. Overtime was not needed to pay your mortgage.

So most weekends you would expect to find my grandfather's family either fishing in the Gulf of Mexico or water-skiing off their houseboat on the river. The union ensured a decent workplace, a fair salary, and a safe pension. When my grandfather passed away, the house had long since been paid for and my grandmother had adequate savings to live comfortably.

While my grandfather passed out countless bits of wisdom (don't all grandfathers?), one sticks out. On one of those days where he decided to work a bit of overtime, he returned home and was asked how he could still do it at his age.

"Well, when we rebuilt the bridge over the Rhine River," he said, "we worked lots of hours with few breaks. While that was bad enough, every so often the enemy would show up and start shooting at us. The way I see it, if no one is shooting at you, running a crane can't get too bad."

As is fairly common among the trades, my dad followed in his father's footsteps. When he returned from the Navy, my grandfather sent him down to the union hall to sign up, and the union has facilitated a life for my dad that's been better than that of non-union workers.

But most of my father's work career has taken place after the passage of the Louisiana right-to-work law. Make no mistake, the legislation does exactly what it was designed to do: undermine unionism and solidarity.

In the early 1980s about 33 percent of the Louisiana private construction industry workforce was unionized. By 2010, that had dropped to 2.8 percent. As union density plummeted during the 1980s, so did unions' ability to negotiate contracts that kept up with the cost of living. In the years following passage of the law, my father's income dropped from around $18 an hour to around $12. Starting pay today for a crane operator in Louisiana is around $20 an hour, just $2 more than my father was making prior to the effects of the law.

My father, in an effort to counteract his lowered purchasing power, was forced to accept a greater and greater number of hours and fewer days off. We were still able to live well during the 1980s and 1990s, but unlike my grandparents, my father worked 50-60 hours a week and my mother contributed another full-time income.

As my brother, and then I, continued the ritual of going down to the union hall to sign up and start working, the decline in real wages and the willingness to work long hours continued. In the last decade or so, Operating Engineers in Louisiana often work as many hours as possible. Today, substantial overtime is expected, and necessary, income.

My father and brother typically work 45-50 hours a week, with stretches of 84 hours a week that might last one to three months. Even though working all the time is a horrible way to go through life, those getting 70+ hours a week are often considered the lucky ones. With a substantial percentage of folks either unemployed for long periods or working part-time minimum wage jobs, the employers have set up a system where the worker who does nothing but eat, sleep, and work is envied.

I worked many of these seven days a week, 12 hours a day jobs prior to my return to school. It is no way to make a living. When there is no weekend to look forward to, the days of the week lose their significance. About 10 days in, they all run together. All you do is work and sleep.

That's in addition to the impact on one's health, the stress on family life, and the potentially catastrophic effects on workplace safety. When the BP refinery in Texas City, Texas, exploded in 2005, killing 15 workers, many of the folks were logging 84 hours a week. Just last year, when a Middletown, Connecticut, power plant explosion killed five workers, the public seemed astonished to learn that employees were working more than 80 hours a week. While there were many causes of both disasters, an exhausted worker is less aware than a well-rested one.

There is a common slogan in the labor movement: "From the folks who brought you the weekend." Unions led the fight for the 40-hour week as well. Is it any surprise that as unions are weakened by right-to-work laws, we are gradually shifting back to 60-, 70-, or 80-hour weeks?

Why are employers having folks work exceedingly long hours? It's cheaper, and by employing fewer people, they generate a surplus of available labor. Management then uses high unemployment as leverage to demand wage concessions.

As other states consider passing right-to-work legislation, their workers need to ask themselves if they would like to be considered lucky for being able to work 80 hours a week. I suppose the workers in states that are already right to work can take comfort in my grandfather's words ... at least the enemy is not shooting at them.

Steven McCloud is a graduate student in labor studies at UMass-Amherst, and a member of IUOE Local 406 and UAW Local 2322. Map above showing states that already have right-to-work laws is from Wikipedia.