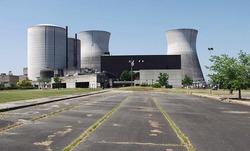 They were designed in the late 1960s. Their design has never received a U.S. Nuclear Regulatory Commission (NRC) operating license. Only four reactors of this design were ever ordered anywhere in the world and of the four reactors that were ordered, only one operated for a short time (less than three years). Two of these four reactors, (the ones you are going to bet on) have been sitting in a partial state of completion for almost 40 years on the banks of the Tennessee River in northeast Alabama. While they were sitting "mothballed," people without nuclear training were allowed into the reactors to strip key components and scrap metal for salvage from critical systems within the reactors.

Fortunately, no one has considered bringing back the Ford Pinto, but TVA is considering resurrecting this Mark C "205" antique nuclear Pinto. Ford management knew before releasing the Pinto there were  potential problems and TVA management also knows there are potential serious safety issues with Bellefonte.

Now my friends at TVA tell me not to worry, the unique design at Bellefonte is "not a big deal," it's just a larger version with more nuclear fuel rods of the "177" design and there are seven of these operating around the country. Of course we all know that TVA has no history with any B&W reactors; they currently operate Westinghouse (Sequoyah 1 & 2 and Watts Bar 1) and General Electric (Browns Ferry 1, 2 & 3) reactors. And did I mention that Three Mile Island was a B&W nuclear design?

A Mark C "205" reactor design has never operated in the U.S., nor ever been licensed by the Nuclear Regulatory Commission, and thus does not provide a safety track record with which to evaluate the design performance. This proposed reactor design TVA wants to utilize at Bellefonte has been operated only once anywhere in the world, and only for a short period of time in Germany in 1988. The  Muelheim-Kaerlich reactor in Germany, a modified version of the Bellefonte design, had a very short history and it is unclear if it really operated in full production for more that 100 days after a two-year "shake down" period. We are still looking for the capacity factors of this reactor.

Another concern is safety procedures, or lack thereof, that have taken place at the Bellefonte site over the past three decades. TVA has had a troubled history with their nuclear reactors in the past. In 1985, TVA certified to the NRC that Watts Bar 1 was ready to operate. A number of employees came forward with information at that time that questioned the safety and readiness for operation at Watts Bar 1. After NRC and Congressional investigations took place, TVA was forced to shut down all of their operating reactors in 1985. It took another 11 years before TVA was ready to certify again to the NRC that Watts Bar 1 was truly ready for operation. Many of the problems grew out of the fact that TVA, as a sister federal agency, had not received the same level of regulatory oversight from the NRC as other private utilities. During this lax period, proper nuclear plant construction procedures where not followed and documentation was poorly maintained. This was the same time period when much of the initial Bellefonte nuclear plant construction was completed.

Even as Bellefonte sat idle, safety issues have come to light. Arnie Gundersen, a licensed nuclear engineer who worked in the field of nuclear power for 35 years, testified before the NRC that "TVA followed no required quality assurance procedures, federal regulations, or industry protocol for more than three years" at Bellefonte during this period. In one of many bizarre twists and turns with this decades-long project, TVA withdrew its construction permit from the NRC for Bellefonte in 2005. After 2005, non-nuclear certified contractors were allowed into the reactor to remove key components that were sold to or used at other facilities.

When TVA reapplied for that permit in 2008, it came under scathing review by the NRC itself. Joseph Williams, an NRC senior project manager, wrote in his report on TVA's application:

"Contrary to the Policy Statement expectations, TVA has not continued to implement the various requirements described in Section III.A.3 of the Policy Statement. Instead, TVA's August 26, 2008, letter describes 'investment recovery' activities, including removal of steam generator tubing and sections of reactor coolant system piping. TVA has subsequently taken action 'to inspect, clean, cap off, and stabilize those systems.' These activities were not conducted in accordance with NRC-approved programs, and were not subject to NRC inspection. Further, TVA states that it is in the process of performing repairs to the site to eliminate water intrusion, indicating the facility has not been maintained in a manner that would prevent serious degradation. It appears that the activities TVA describes are within the scope of the definition of construction as given in 10 CFR 50.2, but have not been conducted in accordance with NRC-approved programs. These activities are not consistent with section lli.B.2(b) of the Policy Statement, and need to be evaluated before the construction permits can be reissued."

Williams' statements did not weigh heavily enough on the NRC, as they reinstated TVA's construction permits for Bellefonte.

If TVA decides to go forward with Bellefonte despite serious questions about financial and safety issues, the plant would likely not be completed until 2020 or beyond. Given that initial construction began back in 1974 and a standard operating life is 40 years, the reactor at Bellefonte could be operating at a ripe old age of nearly 90. A potential NRC-granted 20-year license extension down the road could make for an almost 110-year-old operating reactor. If in 2080 someone asks whether anyone still uses nuclear reactor technology from the Nixon era, hopefully that will be a laughable question. Yet it is deadly serious.

All of these factors make completing the antique Bellefonte nuclear "Pinto" reactors a risky proposition for TVA management. Ford Motor Company management had to make a decision about pushing a 1970s vintage product of questionable design on to the market. Let's hope TVA management makes a better, safer decision.

For more information about safety issues regarding Bellefonte you can visit the Blue Ridge Environmental Defense League website.

(Photo of the abandoned Bellefonte nuclear plant by Mandarax via Wikipedia.)