Skip to main content
Join the voice for a changing South.
Donate Today
By Sue SturgisMay 11, 2011 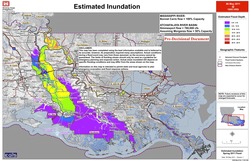 Rising since April 9, the flood-swollen Mississippi River crested in Memphis last night at 47.8 feet, just shy of the record 48.7 feet set back in 1937. But as the floodwaters surge south toward the Gulf of Mexico, officials face difficult decisions about who and what to save.

In Louisiana, the U.S. Army Corps of Engineers has already opened the Bonnet Carré Spillway about 30 miles northwest of New Orleans, diverting floodwaters into Lake Pontchartrain on the city's northern edge.

The Corps is now weighing whether to open the Morganza Spillway on the west bank of the river about 35 miles northwest of Baton Rouge. Used in connection with the Old River Control Structure, the spillway was designed to divert water from the Mississippi into the Atchafalaya River Basin. The Morganza was built in 1954 and thus far opened only during the record floods of 1973.

"Even before [Army Corps] Gen. Walsh opens Morganza, there is no reason for people to wait," Jindal said. "Now is the time to plan for where you would need to go and where you need to evacuate."

If the Morganza Spillway isn't opened, New Orleans could face failures of flood control structures, leading to the inundation of the city. Under that scenario, some parts of the New Orleans area could be under as much as 25 feet of water, according to Corps maps.

Diverting the floodwaters to the Atchafalaya basin west of New Orleans would affect a much smaller number of property owners, with about 25,000 people and 13,000 structures located inside the spillway and backwater areas. Though this area is far less populated than New Orleans, the flooding would still threaten sizable communities including Houma and Morgan City, La. Some parishes have already begun issuing evacuation orders for local areas.

But it's not only homes that are threatened: When the Morganza is opened, about 3 million acres are expected to be underwater -- including about 18,000 acres of cropland. That why Louisiana agricultural officials say the spillway opening should be designated a natural disaster: Without that designation, producers won't be able to make crop insurance claims.

If the Corps opens the Morganza spillway "from the Houma Navigation Canal going westward, we could see 100 per cent oyster mortalities," warned Mike Voisin, owner of Motivatit Seafood in Houma, LA and a member of the state's Oyster Task Force. "Two of the major areas propping up the oyster industry right now will be significantly impacted."

Last year, freshwater was diverted to the east and west sides of the Mississippi in an effort to prevent BP oil from seeping into wetlands. The freshwater killed an estimated 80 percent of the oyster crop, and oil still contaminated oyster beds. As a result, only about half as many oysters were harvested in Louisiana last year as in 2009.

Al Sunseri, an owner of P&J Oyster Co. in New Orleans and a board member of the Louisiana Oyster Task Force, told the Associated Press that the Morganza's opening was "pretty discouraging" for oyster fishers like him:

"It seems like there's never any end in sight. We've been in survival mode for months now."

To see the Army Corps' inundation estimates, click on the map above for a larger version.