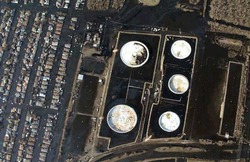 About 60 miles southwest of New Orleans lies the small Cajun and Native American bayou community of Grand Bois, La. Back in 1994, massive open pits there were filled with toxic waste from an Exxon petroleum treatment plant in Alabama, causing widespread illnesses among residents.

Now the Mississippi River flood waters being diverted from Louisiana's major cities by the opening of the Morganza Spillway flood control structure north of Baton Rouge threaten to unearth the benzene, xylene, arsenic and other deadly chemicals dumped there.

The toxic threat facing Grand Bois is part of a much larger problem looming over Louisiana communities being flooded by the Mississippi's diversion: the release of oil, diesel, drilling mud and chemicals into residential areas and the Gulf of Mexico.

"I have been asking for spill prevention measures for the last two weeks and have gotten little to no information from industry or emergency response officials," says Anna Hrybyk of the Louisiana Bucket Brigade (LABB), a grassroots nonprofit that monitors industrial pollution. "People living in the flood zone need to be prepared for serious chemical contamination and cleanup."

Government data compiled by LABB estimates that the flood waters in Louisiana threaten 13,000 oil and gas wells; 3,600 petroleum extraction operations; 4,000 oil waste pits; four oil storage terminals; and the Alon Refinery in Krotz Springs, La. Those numbers could be even higher, as the data is several years old.

While the Louisiana Department of Environmental Quality issued an emergency order [pdf] last week that addresses steps that should be taken by wastewater treatment systems and other potential pollution sources, it did not specifically address preparations by oil and chemical facilities and waste sites. LABB is sending a letter today to relevant agencies requesting plans for soil and water sampling and cleanup in the event of spills.

The watchdog group is especially concerned about the thousands of oil waste pits like the one in Grand Bois. Officials with the Louisiana Department of Environmental Quality told LABB that they have ordered only three of the 4,000 such pits to be emptied in preparation for the flooding.

In response to concerns about flooding of oil waste pits on Louisiana's Bateman Island at the base of Atchafalaya Bay, the state Department of Natural Resources told KATC TV that the facility has a perimeter levee designed to keep out flood waters and that owner U.S. Liquids of Louisiana has recently begun work to raise the levee's height from 12.5 to 14 feet.

These pits have been causing problems in other states. Regulators in North Dakota say oil companies may have ignored warnings to protect the structures from spring floods, resulting in some three dozen spills in recent weeks. Nineteen companies now face millions of dollars in fines as a result.

LABB Director Anne Rolfes notes that regulatory agencies had no effective plans for dealing with widespread chemical pollution following Hurricane Katrina in 2005 -- including a million-gallon oil spill from the Murphy Oil Refinery in a residential community of St. Bernard Parish just east of New Orleans (photo above).

"Oil was everywhere - in the house, in the slab. It was unreal and we decided to move away," says Johnny Lewis, who lived nearby. "I got zero information from the refinery, zero from government who is supposed to be looking out for us."

LABB is holding a press conference in New Orleans today in hopes of prompting industry and the state to properly inform residents about the potential for chemical contamination in flood areas. Residents who witness spills and other contamination incidents can report them to the group's Chemical Accidents Crisis Map at map.labucketbrigade.org.

(Photo of the 2005 spill from the Murphy Oil Refinery from the Environmental Protection Agency.)