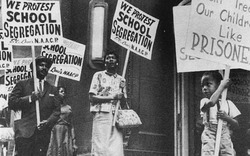 Today marks the 57th anniversary of Brown v. Board of Education, the landmark Supreme Court decision that declared racial segregation in U.S. public schools unconstitutional. Also today, American schools are more segregated than they were four decades ago.

If eradicating racial segregation in education was the original civil rights battle, it continues to be the most enduring one. A court decision that called "separate but equal" schools unlawful led to a couple hopeful decades of racial integration. But today most U.S. kids go to schools that are both racially and socioeconomically homogenous.

And it's not just blacks and Latinos who are racially isolated. White students go to schools that are 77 percent white, and 32 percent poor.

The Obama administration, which is leading an aggressive school reform agenda, knows what's going on. In a major speech calling for the overhaul of the Elementary and Secondary Education Act in 2009, Secretary of Education Arne Duncan acknowledged in understated terms the re-segregation of U.S. schools, as well as the fatigue with everything that's been attempted to address it.

"Most minorities were still isolated in their own classrooms," Duncan said of students growing up in the civil rights era, adding, "Many still are today, and we must work together to change that."

"We've had five decades of reforms, countless studies, watershed reports like 'A Nation at Risk,' and repeated affirmations and commitments from the body politic to finally make education a national priority," Duncan said. "And yet we are still waiting for the day when every child in America has a high quality education that prepares him or her for the future."

But the Obama administration has been otherwise silent on re-segregation in schools, even as its reform policies have targeted poor communities of color where the lowest-performing schools are located. Twenty-first century racial homogeneity in U.S. schools is a product of decades of regressive court decisions as well as residential segregation.

"There are no significant state or federal programs and little private philanthropy addressing policy to either produce better integrated schools with more racial and economic diversity or to train teachers and students about ways to more effectively run impoverished multiracial schools," wrote the UCLA study's author Gary Orfield.

Part of it comes from collective fatigue. The initial, post-Brown push for integrated classrooms gave way over the years to wars over busing and several Supreme Court decisions in the 1990s that forced schools to drop race as a consideration for dealing with school assignments. The Court's 2007 decision limiting Seattle and Louisville school districts from implementing desegregation policies completed its long slide away from Brown v. Board. Meanwhile, education advocates shifted their calls from demands for integration to calls for equity. Alongside that shift, a numbers and testing obsession was taking hold, catalyzed by the 1983 "A Nation at Risk" report Duncan named. That obsession now dominates education reform.

Integrating schools is still a worthwhile goal. Researchers have found that desegregation, while always thorny politically, is one of the most direct methods for raising the education achievement of students of color, especially those that are poor. Columbia University researchers found that when they controlled for other outside socioeconomic factors, students in schools where black and Latino kids were isolated from kids of other races had fewer math and literacy skills -- that their educational development was in effect limited by the racial composition of their schools.

Today, the major thrusts of education reform, echoed and pushed in Obama administration policy, are teacher accountability through testing and charter-school expansion. In this iteration of the school reform saga, race is everywhere -- acknowledging the existence of the achievement gap is an uncontroversial statement these days. But actually naming, and addressing, the roots of educational inequities is passé.

As the Economic Policy Institute's Richard Rothstein told me when I was researching the impacts of the recession on education in communities of color, "Everybody acknowledges differences in achievement but nobody wants to address the inequalities that produce them."

Indeed, the discourse today is schizophrenic in many ways. Teachers, for instance, are singled out as both the ultimate solutions to and the biggest culprits for our nation's education woes. Duncan and his colleagues, the celebrity school reformers like Michelle Rhee and Joel Klein, and the big-city mayors who've backed their reforms often laud and eviscerate teachers in the same breath.

The Obama administration has made adopting punitive teacher accountability policies that evaluate teachers based on their students' test scores a requirement for states that want some federal education money. Through Race to the Top, Obama's marquee education reform project, states have been asked to adopt merit-pay schemes that also tie teachers' jobs to their students' performance on standardized tests. States have also been asked to lift caps on charter schools and designate failing schools for takeover by, among other entities, outside charter groups.

States are not, however, rewarded for adopting the integration policies that education researchers have found to create such change.

"What's missing from the debate is a recognition that teachers and schools alone are not the most important influence on a child's achievement," said Rothstein.

A coalition of race-conscious reformers are promoting a plan they've dubbed the Bolder, Broader Approach to Education, which pushes for a racially explicit and holistic approach to addressing education inequity. There's noticeably no mention of teacher accountability schemes in the three-point version of that plan. It instead calls for high quality early education for all kids, starting from birth and going all the way up through pre-kindergarten. It also calls for high-quality and consistent after school and summer programs for kids, and routine and preventative health care for kids.

"Low-income children have 30 percent more absences than middle-class kids just due to health alone," Rothstein said. The idea is to mimic the supports that middle-class kids have regular access to. "Unless we do something there's still going to be something that's much more important influencing kids' education than the quality of their teachers."

It's not simply a matter of misplaced priorities. Where educational inequities are concerned, the diagnosis has always been easier than deciding on the course of treatment. Nearly 60 years after Brown v. Board of Education, we've yet to resolve the fundamental question of how to deliver high quality public education to kids of all races.

And after decades of wrangling over possible fixes, the de facto re-segregation of American schools is something that the education reform movement, including the Obama administration, have all but given up on addressing. If integrating public schools was once the answer to bringing equity to the classroom, these days, most people are too fatigued and frustrated to even try.

But now more than ever, mustering the energy to address, head-on, the roots of educational inequities is an issue of utmost urgency. Students of color are 44 percent, and growing, of the U.S. public school system. Racial segregation is a legacy we've yet to shake off, nowhere more than in American public schools, where students of color are educated in schools that are today both separate and unequal.

The sweet taste of voting rights in North Carolina