Skip to main content
Join the voice for a changing South.
Donate Today
By David WoolnerMay 13, 2011 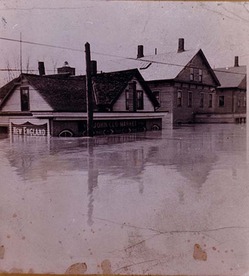 The massive flooding that struck the Midwest in recent days has led a number of climatologists to argue that this event -- along with the occurrence of similar floods in Australia, Pakistan and elsewhere -- is further indication of the impact of the increase in greenhouse gasses in the earth's atmosphere.

The warmer air associated with the increase holds more moisture, and the greater the moisture content, the greater the level of precipitation. Hence the record snowfalls for the upper Midwest this season and the extraordinary amounts of rain that much of the region received in April (Paducah Kentucky, for example, received 22 inches of rain in April, as compared to the average 5.4 inches it usually receives).

For the vast majority of scientists -- and for an increasing number of individuals and institutions in other parts of the world -- the potential impact of climate change is being viewed with growing alarm. But in Washington, just the opposite is true. The US House of Representatives recently rejected an amendment that would have put the House on record as acknowledging that global warming is occurring and that human activity is the major cause. In this milieu, and in spite of the overwhelming evidence to the contrary, there is almost no chance that we will see any significant climate legislation emerge from the current Congress.

Interestingly, 75 years ago the United States faced a very similar natural disaster in the form of the Great Flood of 1936. Unlike today, however, the death and destruction that struck much of the eastern United States as a result of the flood spurred Congress into action. It passed of one of the most significant -- though lesser-known -- pieces of legislation to come out of the New Deal: the Flood Control Act of 1936.

Recognizing for the first time "that destructive floods upon the rivers of the United States constitute a menace to national welfare" and that "flood control on navigable waters or their tributaries is a proper activity of the Federal Government in cooperation with States," the Roosevelt administration worked with members of Congress to pass the first piece of legislation to provide for national flood relief. The hundreds of reservoir, levee, and channelization projects that resulted from the 1936 act protected millions of acres of farmland, saved countless lives, and literally changed the face of the nation. Taken together, the projects that came about as a consequence of the act constitute one of the largest additions to our nation's economic infrastructure, on par with the development of the nation's highway system. Moreover, in keeping with the spirit of the New Deal, the construction of many of these flood control projects (which usually took place under the auspices of the US Army Corps of Engineers) also spurred local and regional economic growth and helped conserve one of our nation's most precious resources -- our soil.

It was perhaps soil erosion, in fact, more than any other issue that drove President Roosevelt to support the passage of the flood control act. Having seen the dire consequences of the Dust Bowl, and as a great lover and believer in the restorative power of the land, FDR was deeply concerned about the long-term productivity of American topsoil. To combat erosion, he not only passed the Flood Control Act of 1936, but also established the Soil Conservation Service, which encouraged farmers to adopt more environmentally friendly practices; the Civilian Conservation Corps, which helped restore our nation's forests; and the Tennessee Valley Authority, which not only helped control erosion in the Tennessee River Valley, but also provided inexpensive hydroelectric power to an entire region of the country.

Most importantly, all of these programs helped create jobs and spur economic activity. And while today many environmentalists might take issue with certain aspects of the flood control work that came about as a consequence of the act (such as the channelization of rivers and streams), few would take issue with the spirit of conservation that inspired it.

The Flood Control Act of 1936 is but one example of the remarkable record of legislative achievements that came about in the 74th Congress. In response to the needs of a people in the midst of both environmental and economic crisis, members of Congress worked with the Roosevelt administration to pass not only this landmark piece of legislation, but also the Social Security Act, National Labor Relations Act, Banking Act of 1935, Soil Conservation Act, and the $4.8 billion Emergency Relief Appropriation Act of 1935, out of which came the WPA, among other programs.

It is perhaps the best testament to our current era that this Congress, facing a remarkably similar set of circumstances, has chosen not "action and action now," as FDR would put it, but rather to do nothing.

David Woolner is a Senior Fellow and Hyde Park Resident Historian for the Roosevelt Institute.

(Photo of the Great Flood of 1936 in Springfield, Mass. from WGBY.)

When are the jobs coming back?