Skip to main content
Defend democracy in the South.
Donate Today
By Bridge the GulfJune 20, 2011 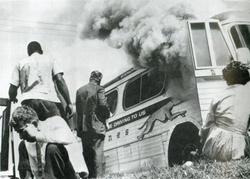 By Rosana Cruz, Bridge the Gulf

In the dim light of a projector, rapt faces took in the solemn image of a bus in flames. On screen, a multiracial group of youth crawled in the grass, coughing and choking from the smoke of the blaze behind them. This was just the first in a series of attacks that the Freedom Riders of 1961 faced as they made their way through the South. Fifty years later, at the RAE House in New Orleans, the lessons and struggles of these youth came alive to a multi-generational, multi-racial audience carrying on the current-day fight for justice.

"Back then they would sic dogs on you and you couldn't ride on those buses but today we have the school-to-prison pipeline," says Briana O'Neal after the viewing of "Freedom Riders," a new Firelight Media documentary directed by Stanley Nelson. The viewing was co-hosted by Voice of the Ex-offender (VOTE, where I am associate director) and Fyre Youth Squad. VOTE and FYS invited a multigenerational audience to share their reflections after the viewing the powerful documentary. This dialogue was critical for us because we wanted to go beyond remembering history, and explore how lessons from the Freedom Rides inform our work today.

What were the Freedom Rides really?

The Freedom Rides of the Civil Rights Movement is a story that has survived over the decades, but the details have faded with time. Many viewers, even those alive at the time of the original Freedom Rides, said that they did not know the true depth and scope and the extreme terror brought against these brave young Riders.

The film describes the Freedom Rides as "six months in 1961 that changed America forever. From May until November 1961, more than 400 black and white Americans risked their lives -- and many endured savage beatings and imprisonment -- for simply traveling together on buses and trains as they journeyed through the Deep South. Deliberately violating Jim Crow laws, the Freedom Riders met with bitter racism and mob violence along the way, sorely testing their belief in nonviolent activism."

The documentary details the planning and execution of the trips (which were initially designed to last two weeks) and the ensuing campaign of terror that white supremacists like the Ku Klux Klan and others, including government officials, waged against the swelling movement of riders. The original group was comprised of a few dozen youth from around the country. The more violence the Freedom Riders faced, thwarting the buses progress, the more young people put themselves in the line of fire. These youth took on a strong leadership role and, by continuing on with the dangerous rides, challenged the Kennedy brothers and even Rev. Dr. King himself, who urged a more moderate strategy. It is a story filled with inspiring moments as well as brilliant strategy.

"I'd heard the Freedom Rider story but never heard the story told this way," shared Fyre Youth Squad member Debbie Carey. "I appreciate this documentary because I felt like I was told the truth about the movement, about young people's contributions to the movement. I even experienced for the first time Dr. King being presented as human as the rest of us. Everyone I know made MLK seem like he was a supernatural hero, but in this documentary it revealed his fear and young people's courage."

Perhaps what resonated most for audience members, young and old alike, was the sense that, especially in current day New Orleans, the need to stand up for justice is still so urgent. "Back at the time of the Civil Rights struggle, we did a lot of stuff in New Orleans. We walked on Canal Street. We boycotted. We went into the white stores. Our teachers, our elders, they encouraged us to see ourselves, even though we were young black men at the time, just high school students, they taught us to see ourselves as full citizens," remembers Mr. Erroll Lewis, a member of VOTE. "Young people are still facing the challenge of discrimination. We have a responsibility to make sure that message to stand up, to demand our rights, is alive today."

The Freedom Riders event was originally conceived to bring different age groups of activists and community members together to commemorate and discuss the historic rides. But "on a deeper level, we wanted to ask each other, would you have gotten on that bus?" said Norris Henderson, director of VOTE. "We didn't know where the conversation was going to take us."

Briana O'Neal responded, "I was asked at the end of the movie, 'Would I have got back on the bus after all that had happened?' I would have to say that I would have to have been there going through what they did to answer that, but in today's world, in my city, I can say I'm on the bus and I'm not getting off until we all are free and our children to come are also free."

Freedom Riders will be rescreened twice this summer in New Orleans, once at the Treme Community Center and once at the Youth Empowerment Village. Watch www.vote-nola.org for the exact date and time. Discussion and refreshments will be included as part of each screening event.