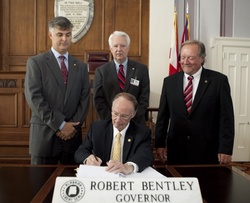 Governor Robert Bentley recently signed a tough anti-immigration law, the latest in a patchwork of similar legislation that has spread through Republican-dominated states this year, just as the importance of Latino voters in the 2012 presidential election is becoming clear.

Yet, Alabama has only a small percentage of undocumented immigrants -- the Pew Hispanic Center estimates 2.5 percent of the state population and 4.2 percent of its workforce -- and they pay sales tax just like everyone else, taxes that support schools, law enforcement and other services vital to the state.

The new law essentially turns educators, business owners, landlords and citizens into immigration officers, and punishes anyone caught hiring, housing or even giving a car ride to an undocumented person in the state. Most disturbing to some is that the legislation targets children.

Alabama school superintendents say they were caught off guard by a last-minute addition to the legislation requiring students to provide proof of U.S. citizenship when they enroll, and requiring schools to collect and file reports on undocumented students.

"Frustration is the key word," said Eric Mackey, executive director of the School Superintendents of Alabama. "I can tell you, I talk to superintendents every day, and the issue of undocumented students just doesn't come up," he said.

Although, under federal law, undocumented students can't be turned away from grade schools, superintendents worry that the new state law will discourage immigrant parents from enrolling their children.

"We don't want a chilling effect that causes children to be uneducated in America," said Mackey. Mackey points out that immigrants aren't freeloading or draining school resources.

More than 40 percent of Alabama's school funding comes from taxes that everyone pays -- on groceries, cell phones, heating and air-conditioning, lights and, even, beer. And almost all the funding for English as a second language (ESL) programs in the state comes from federal sources.

House Bill 56, sponsored by Representative Micky Hammon, was sold to legislators as a jobs-creation action. Supporters argued that in a time of high unemployment, undocumented workers are taking jobs that would otherwise be done by Alabama citizens -- an argument that has been debunked in numerous studies.

The new Alabama law requires immigrants to carry documents proving their legal status at all times, and requires employers to use a federal verification system -- known as E-Verify -- to confirm the legal status of their workers.

Alabama's general contractors, who are getting ready to rebuild a thousand homes and seven public schools damaged in the April tornadoes, say the law unfairly burdens them and targets their workers at exactly the time when the state should be focusing on rebuilding.

"We are very apprehensive about it," said Henry Hagood, chief executive officer for the Associated General Contractors of Alabama. "Contractors depend on the Hispanic workforce, such as roofers, landscapers, painters and brick masons."

Under the new law, contractors have the responsibility of "e-verifying" every employee and facing penalties if an undocumented worker is found on their crew.

"I have some long-term concern about what it will mean to the workforce," Hagood said.

Similar bills have been proposed, and some passed, in other Republican-dominated states, starting in Arizona, then Utah, Indiana and Georgia. The Alabama version, called the toughest yet, is supposed to go into effect Sept. 1, but lawsuits will probably delay its implementation.

The Alabama legislation was passed just as some immigration-reform advocates were feeling upbeat. In Illinois, legislators passed a version of the Dream Act, which will help undocumented youth attend college. In Massachusetts and New York governors rejected Homeland Security's anti-immigrant Secure Communities program.

"It is clear that this issue has now turned into trench warfare, state by state," said Joshua Hoyt, executive director of Illinois Coalition for Immigrant and Refugee Rights. "We are glad about moving forward in Illinois and sorry about moving backward in Alabama."

The Hispanic Interest Coalition of Alabama (HICA) is joining in a lawsuit with the Southern Poverty Law Center, American Civil Liberties Union and other organizations to stop the law from taking effect.

"There is a large amount of outrage among folks in the general community who are saying that this is the wrong thing for Alabama on so many levels," said Isabel Rubio, executive director of HICA.

"People are afraid. It is hard to calm fears in the face of such criminal legislation that affects our immigrant families," said Rubio. "This is aimed at families, and at tearing families apart. Furthermore, it is a slap in the face to those who have fought long and hard to move this state forward in the struggle for civil rights."

The Latino vote is expected to be a decisive factor in many battleground states in the 2012 elections. The Latino community, in general, has been a strong ally of President Obama. If they lose faith and sit out the election, it will cost Democrats crucial votes.

"We are deeply disappointed in the enactment of the law in Alabama; it is showing the dark side of America," said Arturo Carmona, executive director of Consejo de Federaciones Mexicanas en Norteamerica (COFEM) "It's a real scary piece of legislation that is taking this fight to the brink. Going after children is one of the most troubling parts of this law.

"We are calling on President Obama to take steps and provide relief to families, to take some administrative action that will stop the devastating impact to communities. He has the power to restore some sanity to what is happening."

(In the official photo above, Alabama Gov. Bentley signs the immigration bill into law as, from left to right, state Sen. Scott Beason and Reps. Kerry Rich and Micky Hammon look on.)

Pain of state preemption felt by the South's vulnerable communities

A trend toward anti-immigrant, anti-choice laws

Having fled, immigrants again trickle back to Alabama