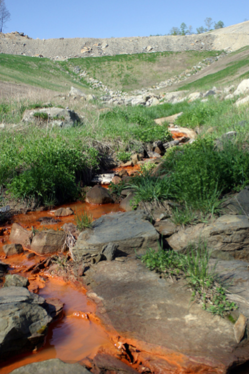 A coalition of environmental watchdog groups has put two Kentucky coal companies on notice -- for the second time in less than a year -- that they could face lawsuits over their failure to comply with clean water laws.

"The sheer number of very serious pollution violations we found in the first three months of 2011 is astounding," says Donna Lisenby, Appalachian Voices' director of water programs. "It shows a systemic and pervasive pattern of ongoing water pollution problems with no meaningful enforcement by Kentucky Energy and Environment Cabinet officials, who continue to sit idly by and let coal companies get away with thousands of violations."

The companies are among the state's biggest operators of mountaintop removal mines. West Virginia-based ICG was acquired earlier this month by Arch Coal of St. Louis, one of the world's biggest coal companies. Frasure Creek is a subsidiary of West Virginia's Trinity Coal, which was purchased last year by India's Essar Group.

Bruce Scott, Kentucky's chief of environmental protection, told CNHI News Service that the cabinet was aware of the violations because the two companies "verbally reported" them. He said a review of the discharge monitoring reports confirmed the companies were out of compliance. Frasure Creek was issued a notice of violation earlier this month, while ICG's notice of violation is forthcoming, Scott said.

However, Lisenby points out that a notice of violation is not the same thing as an enforcement action. She likens it to a speeding driver being stopped by a police officer and, instead of being given a ticket and fine, handed a piece of paper stating that the speeding occurred and asking why.

Last October, the same coalition of watchdogs notified ICG and Frasure Creek of their intent to sue over more than 20,000 alleged violations of the Clean Water Act. The majority of those violations involved the companies filing pollution discharge monitoring reports with state regulators that showed exactly the same effluent data over time, suggesting that the reports were fraudulent.

But right before the 60-day response period expired, Kentucky's Energy and Environment Cabinet announced a settlement that fined the companies a total of just $660,000 -- less than 1 percent of the maximum fine that could be imposed under federal law. Kentucky regulators acknowledged only 2,765 violations of the law by the companies, saying the rest of the alleged violations represented mere "transcription errors." The watchdogs intervened in that settlement, and that litigation continues.

"These new violations show two things," says Scott Edwards of Waterkeeper Alliance. "First, it exposes the cabinet's deal with the coal companies for the ineffective, choreographed sham we always knew it was, and second, it shows that it is almost certain that all those 'transcription errors' the cabinet relied on to soft-pedal its settlement approach were really pollution discharge violations disguised as reporting errors."

Using the companies' own self-reported data, the watchdog groups found more than 1,400 pollution-limit violations by ICG and more than 2,800 violations by Frasure Creek from January through March. Among the pollutants reportedly being discharged in excessive amounts is manganese, an element that's been linked to central nervous system toxicity and intellectual impairment in school-age children.

The findings come amid heightened concern over the impact that mountaintop removal coal mining is having on public health in Appalachia. A study by researchers at Washington State University and West Virginia University published earlier this month found significantly higher rates of birth defects -- including central nervous system problems -- in communities near mountaintop removal operations compared to non-mining areas in the region.

"These violations demonstrate an extraordinary level of malfeasance," says Kentucky Riverkeeper Pat Banks. "When will someone go to jail for exposing our communities to these dangerous pollutants?"

The findings also come amid an effort by coal companies and other industrial interests to block the federal Environmental Protection Agency's enforcement authority, observes Matt Wasson of Appalachian Voices. He points to examples of recent anti-EPA efforts including passage of a bill by the House Transportation and Infrastructure Committee that would gut the agency's authority to enforce the Clean Water Act, calls from at least three Republican presidential candidates to abolish the EPA,  and a bill introduced in the Senate last February to dismantle the agency. As Wasson writes at Grist:


In the midst of Big Coal's anti-regulatory crusade, however, Kentucky coal companies have given Americans another unmistakable reminder of exactly why it is that we really, really need an EPA -- and why a poll for the National Resources Defense Council shows that the agency enjoys the overwhelming support of Americans [PDF] from across the political spectrum.

The same watchdog groups behind yesterday's filing were also involved in a legal action earlier this year over thousands of alleged clean water violations by Nally and Hamilton Enterprises, another mining company with operations in eastern Kentucky.

Edwards says that the latest pollution violations uncovered by the watchdogs illustrate a broader problem with the coal mining industry: In its quest to maximize profits, the industry fails to take seriously the need to safeguard the health of communities -- and regulators are letting it get away with that.

"This industry controls government to a large extent," Edwards observes. "Until the people of this country stand up and say no more .... this is a problem that will continue on and on and on."

ICG and Frasure Creek now have 60 days to respond to the allegations. If the violations have not been addressed by then, the groups plan to pursue enforcement action, which can include filing a federal lawsuit under the Clean Water Act.

(Photo of toxic runoff from a mountaintop removal mine site in eastern Kentucky from iLoveMountains.org.)