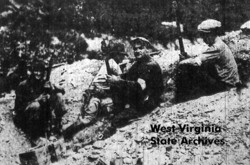 Today marks the start of the March on Blair Mountain, an effort to save the site of a historic labor battle from destruction by coal companies and to bring an end to mountaintop removal mining.

Expected to draw about 600 people, the march is organized by the Blair Mountain Coalition and Appalachia Rising, a movement that uses nonviolent direct action to advocate for a more sustainable future for the region. It commemorates the 90th anniversary of the 1921 Battle of Blair Mountain, when as many as 10,000 coal miners gathered in Logan County, W.Va. and faced off against coal companies and their private security forces in a bloody effort to unionize. The five-day battle was the largest armed insurrection in the United States since the Civil War and ended after the U.S. Army intervened.

Today there's a new battle on Blair Mountain -- this time over the fate of the land. Much of it is owned by Arch Coal of St. Louis and Virginia-based Alpha Natural Resources, which last week bought out Massey Energy.

Last year an alliance of environmental and historic preservation groups filed a lawsuit challenging the National Park Service's decision to remove the Blair Mountain Battlefield from the National Register of Historic Places, a move that leaves the land vulnerable to coal companies that have their sights set on mining the area. At least five locations within the battlefield have already been disturbed by mining, according to a report released last year by the Friends of Blair Mountain.

Just last week, six environmental and historic preservation groups petitioned the West Virginia Department of Environmental Protection to declare the site unsuitable for surface mining "due to its historical significance, natural beauty and the important archaeological sites located there."

The march kicks off today in Marmet, W.Va., and over the next five days participants will walk 50 miles to Blair. The gathering will culminate in a rally and day of action on Saturday, June 11.

March organizers say that the current plans to mine Blair Mountain dishonor the memory of the scores of miners killed in the battle and will destroy one of Appalachia's most significant heritage sites. Among those who have called for preserving the site is United Mine Workers of America President Cecil Roberts, who earlier this year called Blair Mountain "as close to sacred ground as there is for the UMWA."

"As citizens in Wisconsin and across the country stand up to maintain their right to collectively bargain, Blair Mountain stands as a physical reminder of the struggles of previous generations of workers to establish those rights," says Brandon Nida, a Friends of Blair Mountain board member. "It is a place where a new solidarity for the 21st century will be forged between all of those fighting for workers, communities, and our mountains."

(Newspaper photo of miners involved in the Battle of Blair Mountain from the West Virginia Archives.)

VOICES: Let's keep the history of working people from being erased