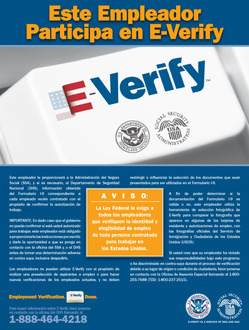 The need for comprehensive immigration reform has become even more pressing as immigrants face a hodgepodge of state and local legislative efforts and federal enforcement programs that vary from county to county.

Yet instead of leadership, we are left with rhetoric divorced from reality as conservatives pursue a mandatory "E-Verify" system to check work authorization.

House Republicans, led by Lamar Smith of Texas, are pushing a bill to obligate employers to use the program, part of an enforcement-only strategy to immigration policy that will prove costly in many ways. E-Verify allows employers to use the Social Security Administration and Department of Homeland Security databases to check names and Social Security numbers against the I-9 forms that new employees must fill out.

The idea is to confirm whether applicants have authorization to work in the U.S. -- no simple feat, given overlapping systems that contain millions of mistakes.

A range of forces, from unions to businesses to immigrants' rights advocates to civil liberties lawyers, have resisted the program. They cite its built-in flaws and potential for discrimination against workers, documented and undocumented alike.

Smith's "Legal Workforce Act" [pdf] is a direct attack on immigrant workers which will negatively impact millions of working people across the country, both those with papers and those without.

It's also comical in its hypocrisy.

At a time when Republicans are crying foul over federal spending and are pleading for smaller government, this proposal will cost the federal government billions to implement and billions more in lost tax revenue.

Apparently, when it comes to an immigrant witch hunt, Republicans are ready to spend, spend, spend. Several groups, including the non-partisan National Immigrant Law Center have provided studies and reports showing the negative impact on all workers were such a system in place.

Some of the biggest issues:

Loss of billions in tax revenue amidst an ongoing economic crisis.

* The Congressional Budget Office estimated that enforcing an E-Verify system would cost the public approximately $17 billion in lost tax revenue [pdf] over a 10-year period due to undocumented workers leaving the tax system and being paid under the table by employers.

* Additionally, just implementing the program could cost upwards of $23 billion over the next 10 years [pdf].

Hundreds of thousands of authorized workers (aka citizens and legal residents) will lose or risk losing their jobs due to a staggering error rate in the system.

* Approximately 770,000 more could lose their jobs [pdf] if implementation happens at a federal level.

Millions of workers, including mostly those who are authorized, will be forced into paperwork hell in order to try and save their jobs (with no guarantee they can).

* If E-Verify is required at a federal level, approximately 1.2 million U.S. citizens and work-authorized immigrants [pdf] would have to contact agencies to fix database errors or risk losing their jobs.

Millions of people authorized to work will be prevented from gaining employment due to errors that claim they are not authorized.

* Because the proposed bill would require employers to pre-screen applicants [pdf], and because of the high error rate in the system, millions of people seeking employment might not get hired, or would be prevented from receiving a first paycheck.

Just like the restrictive and frankly racist laws passed recently in several states, the enforcement-only approach makes the tragically flawed assumption that documentation status is something easily and simply ascertained.

Enforcement-only approaches have the effect of snaring all those who look or act "undocumented" regardless of their documentation status.

For one member of the Arise-Chicago worker center, a naturalized citizen of the United States whose first language is Spanish, the consequences of "looking undocumented" have been significant.

He works in the back of the house at a restaurant and fits the profile of what you might think of for an "undocumented" worker. For this member, as well as so many others in his situation, the consequences of fitting the profile means abuse, discrimination, and job loss.

The restaurant he works at is a prestigious local chain, with locations in the city and the suburbs. In order to avoid paying overtime for employees working in multiple sites, one manager made all the "undocumented-looking" workers change their Social Security numbers in order to continue working.

The Arise member complained, and was told to comply or be fired. He complied, and was caught changing his number and fired by the company's main office.

Fired for obeying a manager's order, fired because the manager assumed he was just another "illegal" working in the kitchen of an expensive restaurant, where the price of a dinner is equal to the daily wage of the people washing dishes and scraping leftovers.

So when you hear Rep. Smith say those with nothing to hide have nothing to fear, or when you hear others who "just want people to obey the law," remember that member of Arise. Remember the reality of weak worker protections, uneven application of regulations, and the racist assumptions of law enforcement agents and bosses that makes life more complicated for millions of "obvious illegals."