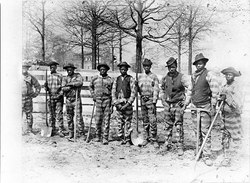 A Southern front has opened up in the corporate-GOP war on workers.

Just look at some recent headlines:

Let's look behind the headlines.

In a 5-4 ruling with Justice Antonin Scalia writing for the "corporate" majority, the U.S. Supreme Court rejected a huge sex discrimination case against Wal-Mart that claimed to represent as many as 1.6 million female workers at the global retail giant. Although the court unanimously agreed that the class action suit could not proceed as presented, the 5-4 ruling said one lawsuit couldn't represent so many women in so many jobs.

Dissenting Justice Ruth Bader Ginsburg said it was clear that "Wal-Mart's delegation of discretion over pay and promotion is a policy uniform throughout all stores," but Scalia and the court's conservative wing were having none of it. Nothing really tied the cases together and each should be considered separately, Scalia said.

In other words, go forth, ye daughters of David, and each take up your slingshot against Goliath. And good luck, by the way.

Key plaintiff Betty Dukes, a Wal-Mart greeter in Pittsburg, California, said she and others indeed do plan to go forth and pursue their cases.

They represent a rising fighting spirit among Wal-Mart "associates." As reported recently by the New York Times' Steven Greenhouse, thousands of Wal-Mart workers have signed up to join the Organization United for Respect at Walmart (OUR Walmart) and hope to raise consciousness among employees about their rights and the need for fairness at the workplace.

The group is supported by the United Food and Commercial Workers union, which thus far has been unable to break the staunch anti-union policies of the 1.4 million-worker company. OUR Walmart has launched a web site -- ourwalmart.org -- to spread the news.

Walmart officials' response? The group's nothing but a ruse to get unions' foot in the door.

Martin Luther King Jr. would turn over in his grave

Memphis City Councilman Kemp Conrad, aping his hero, Gov. Scott Walker of Wisconsin, has proposed that the city privatize its sanitation services and save as much as $25 million per year. This obviously has raised some eyebrows given the history of those sanitation services.

After all, Martin Luther King Jr. came to Memphis in 1968 and lost his life while supporting city sanitation workers. They had gone on strike to protest unfair treatment at the workplace and then faced the anti-union intransigence of then-Mayor Henry Loeb. Just as the workers had done in 1968, protesters against Conrad's proposal vowed to show up at budget hearings carrying signs declaring, "I AM A MAN".

At a press conference last week, leaders with the American Federation of State, County and Municipal Employees said Conrad has been involved in conflicts of interest involving recent city contracts. Conrad denies this. The leaders also noted the $6 million in subsidies the city has promised to Loeb Properties to build a parking garage in Memphis' Overton Square. How can the city pay out such subsidies at the same time it wants to cut services, they asked.

Loeb Properties? Yep, same family as the mayor from 1968, Henry Loeb, who tried to block sanitation workers from joining a union.

What's the Matter with Georgia?

Just what is going on in Georgia these days? Has the state that once boasted enlightened leaders, intellectuals and writers like Martin Luther King Jr., Ralph McGill, and Claude Sitton, the premier reporter of the civil rights era, now turned back the clock to the days of Lester Maddox and Gene Talmadge?

After signing the state's repressive, Arizona-style anti-immigration law and quickly finding himself confronted by disgruntled farmers bemoaning the loss of labor in their fields, Georgia Gov. Nathan Deal, a Republican, vowed to send thousands of convicted criminals into the fields to pick beans, berries, and peaches.

Deal said as many as 25,000 of the state's convicted criminals on probation are jobless, and farmers say they expect to have more than 11,000 unfilled jobs if the state proceeds aggressively to round up undocumented migrant workers.

So the state of Georgia will provide labor for the private profit of the state's farmers. Imagine the lobbying -- and backroom dealing -- that's going to take place to become of one of those lucky farmers. Will there even be any reporters to cover it given the emaciated local coverage of today's media?

That sets up perfect conditions for exactly the same kind of abuse that once haunted the South and even prompted an outcry of protest from one of the region's most notorious racist politicians, turn-of-the-century Mississippi Governor James K. Vardaman. As reported before in this blog, Vardaman shamed himself forever with his racial shenanigans on the campaign trail, yet he was amazingly progressive as a governor, aiding black education, riding herd on greedy corporations, and attacking fraud and abuse in the state's prison system and ending convict leasing.

Convict leasing had become a popular recourse for plantation owners in Mississippi after they lost the labor of their slaves as a result of the Civil War. Their political friends in Jackson were only too willing to help them fill the gaps in their workforce.

What evolved was a system that forced convicts to live amid filth and vermin and often work until frostbite took their hands and feet or sunstroke took their lives.

"Compared to the treatment accorded these convicts, an overwhelming majority of whom were Negroes, slavery was a mild and humane institution," writes Albert D. Kirwan in his classic book on the era, Revolt of the Rednecks: Mississippi Politics, 1876-1925. "If he were sick or disabled, he was replaced by a healthy substitute. Under such a system economy would call for the greatest extraction of labor from a convict in return for the least expenditure for his welfare."

Another historian, J.H. Jones, put it this way: "This brutal system left its trail of dishonor and of death which could only find a parallel in some of the persecutions of the Middle Ages."

VOICES: Workers who win the South change the nation