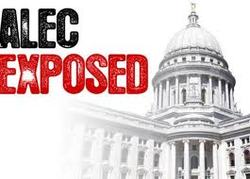 State legislatures, once hailed by Supreme Court Justice Louis Brandeis as "laboratories of democracy" because of their progressive innovations, have for the past couple of decades often been hotbeds of plutocracy instead. The blame for this rests in no small part with a shadowy organization called the American Legislative Exchange Council (ALEC).

Thanks to a WikiLeaks-like initiative by the Center for Media and Democracy (CMD), we now know a lot more about the way that ALEC operates. CMD obtained and has just made public for the first time the full texts of more than 800 model bills and resolutions secretly approved by ALEC's corporate and legislative members. These positions are often introduced -- in many cases word-for-word -- by rightwing state legislators and all too frequently become the law of the land. The trove of documents is available at a website called ALEC Exposed.

ALEC was created in 1973 by the far-sighted conservative strategist Paul Weyrich, who was also involved in the establishment of the Heritage Foundation and other institutions of the Right. Though it never became a household name, ALEC was playing an influential role in the direction of state policymaking as early as the 1980s. A 1984 article in The National Journal, noting that its leaders got "the red carpet treatment from the Reagan White House" when they met in Washington, called ALEC "the New Right group that has done the most to set the conservative agenda at the state level."

That agenda is the same one being pushed more than a quarter-century later by the greatly expanded cohort of ALEC allies generated by the Republican landslide in last November's elections: tax limitation, cuts in social spending, restrictions on public employee collective bargaining rights, privatization, reduced regulation of business, school vouchers, and much more.

Corporate critics first began to pay serious attention to ALEC about a decade ago. In 2002 two environmental groups -- Defenders of Wildlife and the Natural Resources Defense Council -- issued a report entitled Corporate America's Trojan Horse in the States that debunked ALEC's claim of being a non-partisan good government group and showed how it was dominated by and promoted the interests of large companies such as Chevron, Philip Morris and Enron. The legislators who made up the purported membership of ALEC were simply a conduit for policy prescriptions devised by corporate lobbyists and trade associations.

Progressive organizations set up a website called ALEC Watch to monitor the group's activities and launched a counterpart entity called ALICE (American Legislative Issues Campaign Exchange). The latter was not a great success, but it helped give rise to today's Progressive States Network.

Additional investigative reporting -- including accounts by progressive infiltrators at ALEC events -- and analyses such as a May 2010 report by the American Association for Justice called ALEC: Ghostwriting the Law for Corporate America have revealed more about the group's modus operandi.

What remained largely secret were the details of the proposed legislative language prepared by ALEC's corporate members. Now that has changed with the arrival of ALEC Exposed.

The scope of the issues covered by ALEC's model bills is extraordinary. CMD divides them into seven major categories ranging from worker/consumer rights to tax loopholes/budgets, each of which contains dozens of items on very specific issues.

Within the model bills on worker and consumer rights are, of course, the notorious Paycheck Protection Act (which seeks to weaken union participation in the political process) and the Prevailing Wage Repeal Act. But there's also a bill that allows gives employers the option to pay workers with prepaid debit cards rather than cash.

There's a model bill on "class action improvements" (designed to make it harder to certify classes), but also one on "admissibility in civil actions of nonuse of a seat belt." In the health area, there's a "model resolution on disease management of chronic obstructive pulmonary disease" as well as one on "taxation of moist smokeless tobacco."

Browsing through the inventory of bills, one comes away with the unsettling feeling that Corporate America is asserting its interest in every single aspect of public policy. Given that corporations and their executives supply legislators not only with model bills but also campaign cash, those interests too often prevail.

Justice Brandeis is also known for having said: "We can have democracy in this country, or we can have great wealth concentrated in the hands of a few, but we can't have both." ALEC is helping to ensure we make the "Right" choice.