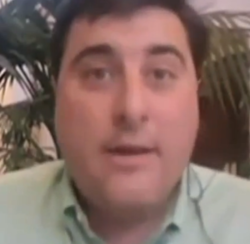 The Brave New Foundation video released earlier this week about the Koch brothers' role in the fight over school re-segregation in Wake County, N.C. has struck a sour note with Americans for Prosperity. The Koch-funded conservative advocacy group is the focus of the video for its involvement in an effort to end the public school system's student assignment policy based on economic diversity.

The head of AFP's North Carolina chapter is demanding a retraction of remarks that I made in the video -- even though statements he made himself confirm they are true.

In a memo sent this week to the Institute for Southern Studies, the nonprofit publisher of Facing South, AFP-NC Director Dallas Woodhouse (in photo above, a still from the video) objects to the following statements that I made in the video:

"Americans for Prosperity played a very important role in the Wake County elections."

"What role is that? Did Sue follow the money? If so what did she find? Did she find campaign finance reports with Americans for Prosperity's name on them?

Again, AFP played no role in the 2009 [Wake County school board] election.

On the matter of whether AFP played a role in the 2009 election, Woodhouse himself acknowledged his group's involvement in a statement he posted to the group's website this past January:

"The North Carolina chapter of Americans for Prosperity -- along with our Wake County members and other key allies -- were pleased to play some small part in this fight," said AFP North Carolina State Director Dallas Woodhouse.

In a follow-up interview with Newsweek also this past January, AFP's national office and Woodhouse both confirmed that AFP's North Carolina chapter worked on Wake County's 2009 school board election:

As for AFP, its national office says the national organization has not been involved with the Wake County school board, but that the state group affiliate has.

Woodhouse told Newsweek that AFP-NC did voter education and volunteer work on the Wake school board campaign. It should be noted that AFP's state group affiliates are in turn supported by the national organization.

Indeed, Woodhouse appears to have a hard time keeping his stories straight about AFP's role in the Wake County public schools. AFP-NC's web page is filled with pages of announcements -- many written by Woodhouse himself -- related to Wake school politics.

As to whether I found campaign finance reports with AFP's name on them -- no, I didn't. But then, I didn't claim that I did. Nor did I claim that AFP-NC bought any ads related to the race.

Neither does the Brave New Foundation video say that the money flowing from AFP to the school board election was in the form of direct campaign contributions or ad buys, though perhaps it could have made that point more clearly. The video quotes Bob Geary, a reporter who covers Wake County for the Independent Weekly newspaper:

The Koch brothers didn't put money directly into the Wake school board elections. But indirectly, Americans for Prosperity put hundreds of thousands of dollars and lot of effort into helping the school board candidates get first organized and then nominated and elected.

AFP-NC's investment in organizing around the Wake County school board can be traced back at least to the 2006 mid-term election, when there was a $970 million local school bond issue on the ballot. AFP-NC took the lead in organizing opposition to the bond, using the controversy over student assignment as one of its rallying points. The group also worked closely with a number of local organizations that would later play an important role in the 2009 election.

Though AFP-NC lost and the bond issue passed, the group continued to organize against the school board and its assignment policy leading up to the last election.

AFP-NC did not do this work for free, hence there is indeed money to be followed.

And it's work that paid off richly for AFP-NC -- one reason why it's so curious to see the group now trying to distance itself from accomplishments it once proudly claimed.