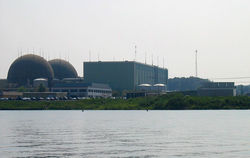 The scare over the impact the Aug. 23 earthquake in Virginia had on Dominion's North Anna nuclear station underscores the seismic risks facing the U.S. nuclear industry -- and it raises urgent questions about federal regulators' reluctance to promptly implement the lessons of Japan's Fukushima disaster.

The dual-reactor North Anna plant (in photo) is located on Lake Anna in Virginia's Louisa County, about 15 miles from the quake's epicenter near Mineral, Va. The facility -- which is among the U.S. nuclear plants regulators consider most vulnerable to seismic damage -- temporarily lost power after the 5.8 temblor struck just before 2 p.m. Tuesday, though the plant's diesel generators automatically switched on to maintain cooling operations. Off-site power was restored to the plant by about 5 p.m.

The North Anna plant was designed to withstand an earthquake of up to 6.2 in magnitude. Edwin Lyman of the Union of Concerned Scientists called the narrow margin between the quake's magnitude and the design specifications "uncomfortably close," Reuters reported. Lyman continued:


"If Fukushima wasn't a wake-up call, this really needs to be to get the NRC and industry moving to do seismic reviews of all the nuclear power plants in the country."

There's growing concern over nuclear plants' seismic vulnerability since a March quake and tsunami led to meltdowns and ongoing releases of radioactive pollution at the Fukushima Dai-ichi nuclear plant in Japan.

Following the Japanese disaster, MSNBC news did an in-depth report on earthquake risks at U.S. nuclear plants that was based on NRC risk data. The following are the 10 plants with the greatest risk of core damage caused by an earthquake, with North Anna coming in seventh:

The NRC's odds consider both the chance for a serious quake and the strength of the plant's design. The risk for a typical U.S. reactor to suffer earthquake-related core damage is 1 in 74,176 -- 10 times more likely than someone winning $10,000 by buying a ticket in the Powerball lottery, as MSNBC pointed out.

The risks of a quake at North Anna were known as far back as 1970. In 1975, then-owner Vepco was fined $60,000 -- the maximum allowed by law -- for building the plant over a known geologic fault, the Washington Post reported at the time. Vepco was convicted of making 12 false statements to the NRC about the fault's existence.

An NRC inspection of the North Anna plant conducted this past April following the Fukushima disaster noted earthquake vulnerabilities at the facility, the Center for Public Integrity reported:

Specifically, the NRC report notes that portions of water and gaseous suppression systems and hose stations "are not seismically designed."

The report noted that "potential leakage can occur through penetrations following seismic event."

And core damage isn't the only threat earthquakes present to nuclear power plants: There's also concern about what a major quake would mean for the water-filled pools used to store spent fuel at most U.S. nuclear plants. Bob Alvarez, a senior scholar at the Institute for Policy Studies who recently authored a report on the dangers of spent fuel storage in the United States, addressed the issue in a piece on the IPS blog posted shortly after the quake:

The North Anna reactors are of the Westinghouse Pressurized Water design and went on line in 1979 and 1980 respectively. Since then the reactors have generated approximately 1,200 metric tons of nuclear spent fuel containing about 228,000 curies of highly radioactive materials -- among the largest concentrations of radioactivity in the United States.

Alvarez went on to note that almost 40 percent of the radioactivity in North Anna's spent fuel pools is in the form of cesium-137, a long-lived isotope that presents serious health risks and accumulates in the food chain. He continued:

The spent fuel pools at North Anna contain four to five times more spent fuel than their original designs intended. As in Japan, all U.S. nuclear power plant spent fuel pools do not have steel lined, concrete barriers that cover reactor vessels to prevent the escape of radioactivity. They are not required to have back-up generators to keep used fuel rods cool, if offsite power is lost. Even though they contain these very large amounts of radioactivity, spent reactor fuel pools in the United States are mostly contained in ordinary industrial structures designed to protect them against the elements.

Despite the potentially catastrophic risks, however, U.S. regulators have been slow to address the nuclear industry's seismic safety issues, Last month an NRC task force created to consider the lessons learned from the Fukushima disaster released its findings. In order to better protect U.S. reactors from earthquakes and floods, the task force recommended that the NRC adopt a new regulatory framework to replace what it said amounts to a "patchwork" of existing rules.

NRC Chair Gregory Jaczko called for the commission to take up the task force's recommendations within three months, but his fellow commissioners resisted, saying they had "significant reservations." They proposed sending the suggestions to NRC staff for further consideration -- a move that Jaczko criticized as "micro-management."

Late last week, the NRC finally decided to give its technical staff 45 days to analyze most of the task force's recommendations -- but it's giving them 18 months to analyze the recommendation for a new regulatory framework, The Hill reported.

Meanwhile, two dozen public-interest groups filed 19 separate legal challenges earlier this month calling on the NRC to slow down re-licensing of existing reactors and licensing of new ones until it addresses the lessons of Fukushima.

(Photo of the North Anna nuclear plant by dougward via Wikipedia.)