Skip to main content
Join the voice for a changing South.
Donate Today
By Sue SturgisAugust 18, 2011 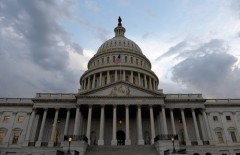 Number of lawmakers on the Joint Select Committee on Deficit Reduction -- also known as the "Supercommittee" or "Super Congress" -- assigned to find ways to reduce the budget deficit: 12

Amount by which the Super Congress, evenly divided between Democrats and Republicans, is charged with reducing budget deficits over the next decade: $1.5 trillion

Number of other joint committees in U.S. history that had so much power, which includes the ability to write and report legislation: 1*

Amount of special-interest money that has flowed to Super Congress members over the past decade, according to an analysis by Maplight: $64.6 million

Rank of the Club for Growth, a fiscal-conservative PAC that advocates lower taxes and less government spending, among the top organizational contributors to Super Congress members: 1

Number of banks and other financial organizations among the top 10 organizational donors to Super Congress members: 4**

Total amount donated to Super Congress members by the securities and investment industry, which was second only to lawyers and law firms: $11,221,416

Amount the Democratic members received from oil interests during the 2010 election cycle: $71,700

Amount the Republican members received from those same interests: $791,474

Date on which Sen. David Vitter (R-La.) introduced the Super Committee Sunshine Act, which would require the panel members to disclose political contributions of $1,000 or more within 48 hours of their receipt: 8/2/2011

Date on which Vitter's bill was referred to committee, where it still resides: 8/2/2011

Date by which Super Congress must deliver an agreement to stave off automatic cuts, which would be evenly divided between domestic and defense programs: 11/23/2011

* The Joint Committee on Atomic Energy, from 1946 to 1977.
** Goldman Sachs, Citigroup, JPMorgan Chase, Bank of America

INSTITUTE INDEX: Four years after Citizens United, the movement for reform is growing