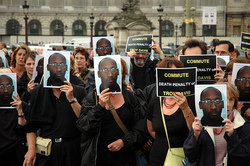 Year in which Davis was convicted of the 1989 murder of Savannah, Ga. Police Officer Mark MacPhail: 1991

Number of pieces of physical evidence produced at trial that identified Davis as the gunman: 0

Of the nine eyewitnesses who testified at Davis' trial that he was the gunman, number who have since recanted their testimony, accusing police of coercion: 7

Year in which four of Davis' original jurors signed affidavits saying the post-conviction evidence led them to support a new trial, an evidentiary hearing or executive commutation of the death sentence: 2007

Year in which one of Davis' jurors said that the post-conviction evidence left him with lingering doubts about Davis' guilt and regrets about the death sentence: 2007

Year in which a U.S. Supreme Court ruling allowed citizens who are "irrevocably  committed" to vote against the death penalty to be excluded from capital juries by the prosecution: 1968

Year in which the U.S. Supreme Court first acknowledged that  the "death qualification" of capital jurors produces more conviction-prone juries: 1986

Percent increase in the probability that a juror with a favorable attitude towards the death penalty will vote to convict: 44

Year in which a federal judge argued that to execute Davis given the state of the evidence against him would be unconscionable: 2009

Final vote of the panel on which that judge sat to let the execution move forward anyway: 2-1

Year in which Judge William T. Moore of the U.S. District Court for the Southern District of Georgia acknowledged that "the State's case [against Davis] may not be ironclad" before ruling to allow his execution: 2010

Number of U.S. inmates who have been released from death row on grounds of innocence since 1976: more than 130

Number of people in Georgia who have been exonerated of crimes they were convicted of through DNA testing: 8

Of those eight, number misidentified by eyewitnesses at their initial trial: 8

Total number of years those eight innocent people served in Georgia prisons before being freed: over 100

Number of members of Congress who wrote to the Georgia State Board of Parole and Pardons this month asking them to commute Davis' sentence: 51

Number of Nobel Peace Prize Laureates who have called for Davis' clemency: 3

Number of faith leaders who have signed a letter to the state Board of Parole and Pardons asking for clemency for Davis: nearly 3,500

Number of those signatories who are religious leaders from the South: 1,000

Number of those signatories who are from Georgia: 250

Date of a planned International Day of Solidarity for Troy Davis, with people around the world taking various actions to stop his execution: 9/16/2011

Date on which the Board of Parole and Pardons will hold a hearing on Davis' petition for clemency: 9/19/2011

(Click on figure to go to source. For more details on the case and the clemency effort, visit Amnesty International's Troy Davis website. Photo of 2008 Paris demonstration for Davis by the World Coalition Against the Death Penalty via Wikipedia.)

INSTITUTE INDEX: The South's execution lust puts it in rare and brutal company

Questions remain about possible execution of an innocent man in Texas