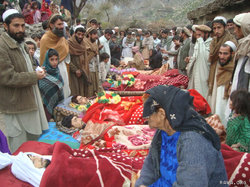 Number of people killed in the attacks of Sept. 11, 2001, when al-Qaeda operatives hijacked jetliners and crashed them into the World Trade Center, the Pentagon and a Pennsylvania field: 2,996

Date on which then-Secretary of Defense Donald Rumsfeld ordered aides to look for evidence of Iraqi involvement in the attacks: 9/11/2001

Of the 19 identified hijackers, number who were Iraqis: 0

Date on which the U.S. and its allies launched strikes in Afghanistan against al-Qaeda and its ally, the Islamist militia Taliban: 10/7/2001

Date on which the U.S. and U.K. launched war against Iraq after claiming it was hiding weapons of mass destruction: 3/20/2003

Number of those alleged Iraqi weapons of mass destruction that were ultimately found: 0

Estimated number of civilian casualties in Afghanistan through 2010: 8,832

Number of coalition forces killed to date in Afghanistan: 2,705

Number of those forces killed that were U.S. troops: 1,760

Number of coalition forces killed to date in Iraq: 4,792

Number of those forces killed that were U.S. troops: 4,474

Of the over 6,200 U.S. troops killed to date in Afghanistan and Iraq, percent that were from the South: 34

Total number of U.S. veterans who have served in Afghanistan or Iraq over the past decade: 1.6 million

Estimated cost of future disability payments and health care for those veterans: $600 billion to $900 billion

Number of U.S. veterans who commit suicide each year: 6,500

Percent by which the Army suicide rate has increased over the past decade: almost 200

Date on which a federal appeals court ruled that the Department of Veterans Affairs was failing to properly care for vets with combat-related mental illnesses: 5/10/2011

Percent by which bills yet to be received are expected to increase this amount: more than 50

Amount the U.S. is expected to spend this year on the war in Iraq: $48 billion

On the war in Afghanistan: $122 billion

Number of children who could be provided with health care for two years with the money being spent on those two wars in 2011 alone: 43 million

(Click on figure to go to source. Photo of Afghan civilian victims of a military strike is from the Revolutionary Association of the Women of Afghanistan via Wikipedia.)