This week, the Department of Justice rejected the new Texas political maps drawn up by Republican state lawmakers, largely on the grounds that they failed to ensure representation for the state's burgeoning Latino population.

It's not clear yet whether the Texas decision signals an increasing willingness in the Obama's DOJ to challenge GOP redistricting in other Southern states where plans must gain federal approval under the Voting Rights Act.

But what the Texas controversy does highlight is the barriers faced by Latino voters, who despite burgeoning growth -- 43 percent over the last decade, according to the 2010 Census, or 15.2 million people -- face stubborn obstacles to political power.

Although Latinos drove 65 percent of the state's growth over the past decade and now make up 37 percent of the population, the GOP-dominated Legislature only drew one of the four new congressional districts to favor Latino candidates. Of the 36 congressional seats the state now claims, just 19 percent are Latino "opportunity districts"--where Hispanics stand a good chance of electing their candidates of choice.

The Texas plan also dilutes heavily-Democratic Austin by parceling it into five Congressional districts, and reduces by two the number of "opportunity districts" in the state House of Representatives.

This made Texas among the "worst" in marginalizing Latino voters, according to Rosalind Gold of the National Association of Latino Elected and Appointed Officials Educational Fund. But the twin realities of Latinos' growing presence and yet lingering marginalization is echoed in other Southern states.

Georgia, for example. 28 percent of the state's population growth since 2000 was fueled by Latinos. Yet it wasn't until this year that state lawmakers created a legislative district that had at least 50 percent Latino population -- and this new district bypassed the state's only two existing Latino lawmakers (one Democratic, one Republican).

At the local level, at-large voting -- long criticized by African-Americans for allowing a white majorities to lock out challengers -- also hinders the ability of Latinos to win races. In Dalton, Ga. -- "America's Carpet Capital of the World" -- 44 percent of the population is Latino, yet according to Jerry Gonzalez of the Georgia Association of Latino Elected Officials, there has "never been a Latino elected in the city of Dalton."

The ultimate showdown will likely happen in the battleground state of Florida. 54.7 percent of the state's 2.8 million new residents since 2000 identified as Hispanic in the 2010 Census, with Central Florida leading the state. According to one estimate, that makes Latinos just over 19 percent of the state's voting-eligible population.

But under Florida's "Fair Districts" plan approved by voters in 2010 -- and recently upheld by a federal judge -- lawmakers are instructed to avoid gerrymanding for partisanship and incumbency and instead draw compact districts. The law also calls for districts that maximize the ability of historically minority voters to elect candidates of their choice.

How the state's Republican majority will interpret the Fair District rules is another question -- something the Department of Justice will be watching very closely. 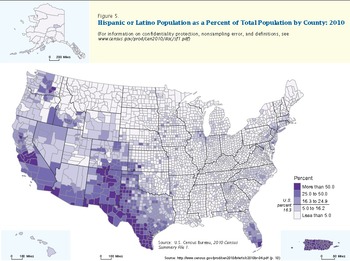 Will the Supreme Court strike down part of the Voting Rights Act?