As environmental health advocates call on Environmental Protection Agency Administrator Lisa Jackson to release a long-awaited report on the health impact of dioxins, an analysis by Facing South finds that Southern communities bear a disproportionate burden of industrial dioxin pollution.

A class of toxic chemicals that persist in the environment and build up in the food chain, dioxins have been linked to a host of health problems including immune-system damage, hormone disruption and cancer -- and at very low levels of exposure. Environmental dioxin pollution has been declining since the 1970s, but the EPA says current exposure levels "remain a concern."

That's why the agency has undertaken a reassessment of the chemicals' effects on human health. The EPA has said it would release the non-cancer portion of the reassessment this month, with the cancer portion to follow "as expeditiously as possible." The reassessment has been delayed for decades amid political pressure from industry.

EPA is expected to recommend an intake limit of 0.7 picograms of dioxin per kilogram of body weight per day, The Atlantic reports. (A picogram is one-trillionth of a gram.) The anticipated limit is lower than the 1 to 4 picogram limit set by the European Union for various foods.

Americans get most of their dioxin exposure from eating dairy products, meat, fish, poultry and eggs, which shows why blood dioxin levels are much lower in vegans, who do not eat animal products.

So how does dioxin get into the environment in the first place? Some is produced by natural events such as volcanoes and forest fires. Another source is open trash burning. But most dioxin pollution is a byproduct of industry, with plants producing chemicals, steel, cement and paper topping the list of the heaviest dioxin polluters in the United States. Wood preservation plants are another major dioxin source as some use chemicals similar to dioxins in the preserving process.

The chart below -- click on image for a larger version -- lists the 30 U.S. industrial facilities that released the highest levels of dioxins and dioxin-like compounds to the air and surface water in 2010, using self-reported data from EPA's Toxics Release Inventory.

* The South bears a disproportionate burden of dioxin pollution, with 25 of the 30 worst dioxin polluters located in Southern states. There are six major dioxin-emitting facilities in Alabama, five in Louisiana, four in Texas and three in North Carolina.

* The worst dioxin polluter in 2010 was Westlake Vinyls in Calvert City, Ky., which reported releasing over 14,000 grams -- more than 31 pounds -- of dioxins and dioxin-like compounds to surface waters in 2010 alone. Calvert City, located on a heavily industrialized section of the Tennessee River, has been called a "national sacrifice area" by environmental justice advocates because of its unusually heavy concentration of polluting industry.

* Michigan-based Dow Chemical owns the second and third-biggest dioxin emitters, in Texas and Louisiana respectively. And the Kansas-based conglomerate Koch Industries through its Georgia-Pacific subsidiary owns three of these top dioxin-emitting facilities -- two in Alabama and another in Arkansas.

* Several other major industrial emitters of dioxins are owned by foreign corporations, including companies based in Brazil, Germany, Taiwan and Canada. 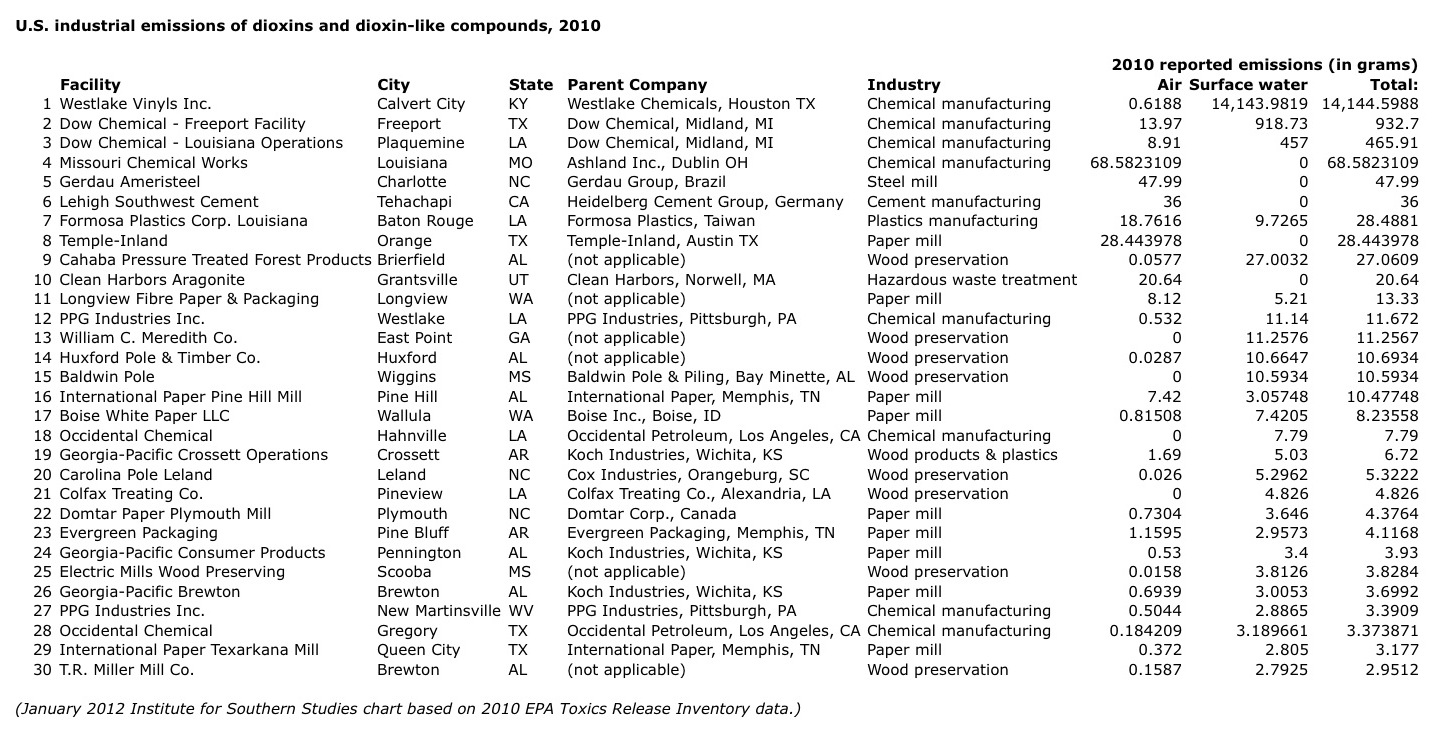