Skip to main content
Join the voice for a changing South.
Donate Today
By Chris KrommMarch 14, 2012

As Rick Santorum will be happy to tell you, the polls had it all wrong in Alabama and Mississippi.

It isn't the first time these Deep South states have shredded pollsters' predictions. Perhaps sensing an upset, earlier this week Silver pointed out that between 1972 and 2008, polls conducted in the final two weeks before election day in Alabama and Mississippi have been off 5.4 percentage points per candidate -- higher than any other part of the South or country.*

Now that the votes and exit polls are in, how did Santorum pull off his victories? And what does it say about how the GOP presidential hopefuls are faring in the South?

Judging from the exit polls, Santorum's victories in three Southern states -- Alabama, Mississippi and Tennessee -- have been driven by one core strategy: winning over the "anti-Romney" electorate of conservative and religious voters who used to vote for Newt Gingrich.

Separated by nearly two months, the South Carolina and Alabama primaries give us a clear view of this Deep South shift. Both are deeply conservative states adjacent to Gingrich's home state of Georgia.

And as the exit polls reveal, the conservative and religious voters who were in Gingrich's column in South Carolina last January flipped to supporting Santorum in Alabama this week. 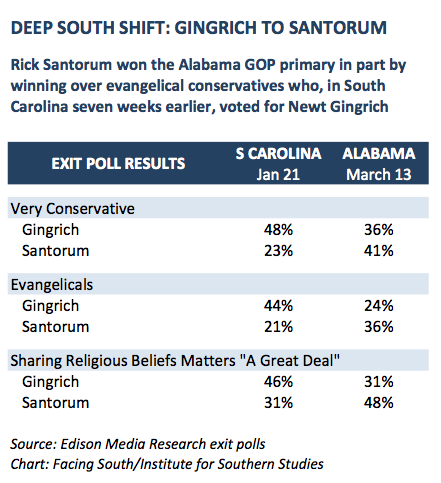 This isn't a huge surprise: Ever since his strong showing in the first Iowa primary, Santorum has positioned himself as the best conservative bet to block Romney's nomination. But a key question was whether Santorum could defeat Gingrich in his native Southern turf.

Gingrich's early "all-in" capture of South Carolina, followed by a home-state victory in Georgia, made Santorum's chances in the South look grim. But helped by Gingrich's miscues, as well as a relentless pounding on the airwaves from Romney, Santorum has enjoyed a fine March in the South, first winning Tennessee, then this week's contests in Alabama and Mississippi.

But with seven Southern primaries now finished, who's shaping up to be the strongest Republican candidate in this critical region?

Interestingly, Romney is still the top vote-getter in the South. Out of some 4.9 million votes cast in Southern GOP primaries to date, Romney has garnered more than 1.7 million, or 35.9 percent -- enough to lead the Republican pack. Even taking out the Virginia primary, where Gingrich and Santorum (disastrously) weren't able to get on the ballot, Romney can claim 34.5 percent of Southern GOP primary voters in 2012.

Gingrich, current troubles aside, comes in second with 32.8 percent of Southern votes to date; take out the Virginia mishap, and it rises to 34.7 percent, just barely edging Romney.

And what about the surging Santorum? Even with his three Southern victories, he still can only claim 20.7 percent of the GOP primary vote in the South -- a figure that rises to only 21.9 percent if you take out Virginia.

Santorum is also winning in states that, when it comes to presidential races, are already assumed to be in the GOP column. When it comes to toss-ups like Florida (we'll never know what might have happened in Virginia), and maybe-battlegrounds like Georgia, Santorum has been at his weakest.

As for the GOP primary race: Will Santorum's Southern momentum, fueled by a falling Gingrich, last? Check back on March 24, when the Louisiana results start rolling in.

* Why the Alabama/Mississippi polling discrepancies? Silver speculates it could be some combination of social desirability bias -- voters telling pollsters what they think they want to hear, rather than how they truly intend to vote -- and the high rates of cell phone users in Southern states, who are under-represented in polls.

Will third parties make a difference in November?

Southern Super PAC Tuesday: Who got the most for their campaign cash?