Duke Energy and its Progress subsidiary gave the Republican Governors Association over $3 million this election cycle -- more than seven times what they gave to the Democratic governors group. The RGA spent heavily to support the re-election of South Carolina Gov. Nikki Haley and Ohio Gov. John Kasich, both of whom oppose renewable energy initiatives.

On Oct. 21, two weeks before the general election, Duke Energy of North Carolina, the nation's largest utility, sent the Republican Governors Association (RGA) the largest donation by far that the 527 political advocacy group has received from the state in at least four years: $2 million.

Last year, Duke subsidiary Progress Energy gave the RGA $275,000. That brings the company's total contribution to the RGA during the 2013-14 election cycle to over $3 million, and more than $3.4 million since 2011.

While there is no way for the public to track how money from a particular donor is spent by a national group like the RGA, it's likely the energy giant's contributions helped re-elect incumbent governors Nikki Haley of South Carolina and John Kasich of Ohio, both pro-business Republicans.

The RGA spent $2.2 million on ads that benefited Kasich, $1.4 million of which targeted his Democratic opponent, Ed FitzGerald. In South Carolina, the group bought $680,000 worth of ads that opposed Haley's Democratic challenger, Vincent Sheheen. Kasich won handily with 64 percent of the vote, while Haley took 56 percent to Sheheen's 41 percent.

Duke Energy, which produces most of its electricity from polluting coal, natural gas, and nuclear plants, stands to benefit from Haley's and Kasich's victories because of their opponents' backing for renewable energy.

In contrast to Duke Energy's $3.4 million in contributions to the RGA since 2011, the company and its Progress subsidiary have given the Democratic Governors Association $855,500 during that time, roughly $200,000 per year.

See below for a table detailing Duke Energy's donations to the governors associations. 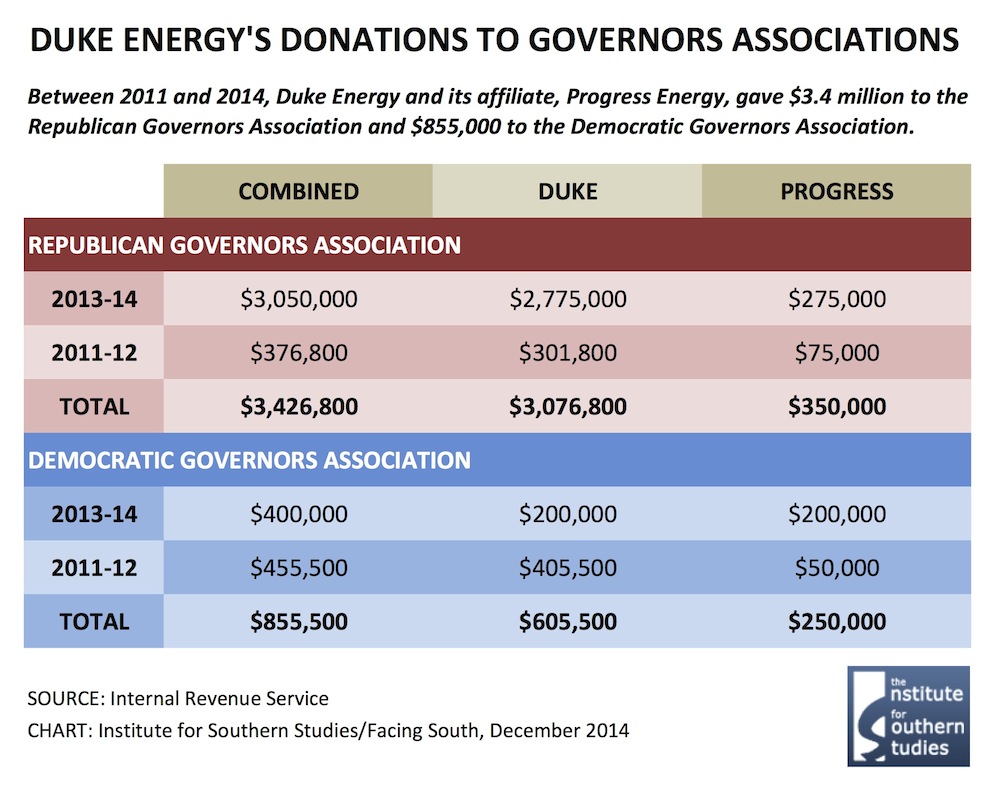