Southern states still rate among the highest in the country for church attendance, as the map shows. But recent surveys suggest that once-dominant white evangelicals are in decline in the South. (Map from Gallup.)

Last month, Indiana sparked a national debate over so-called "religious freedom" bills, a controversy that soon flared up in other states across the South and country.

As many quickly pointed out, these measures aren't new: A federal "religious freedom" act passed in 1993. After the Supreme Court ruled in 1997 that it couldn't be enforced at the state level, states moved to pass their own versions, with momentum building in the wake of court decisions legalizing same-sex marriage.

The newest batch of RFRA laws go further than their predecessors. As Think Progress and others have noted, while the federal and early state RFRA laws focused on blocking state actions that supposedly put a "substantial burden" on religious beliefs, measures like the one passed in Indiana are rare in extending the law's purview to disputes between private parties, such as a business and a customer.

But another reason for the strong public backlash to the Indiana bill and other recent measures is evolving attitudes. Part of this changing sentiment is being chalked up to shifting views about gay marriage and LGBT rights, especially among millenials. While support for same-sex marriage is still lower in many Southern states, over time the needle has moved -- albeit slowly -- in the South and country to growing acceptance and support.

There's another factor that may be playing into changing views about gay rights and "religious freedom" bills, which hasn't received as much attention: the declining clout of white evangelicals, especially in their stronghold in Southern states.

Politically, white evangelicals have been the driving force -- in numbers, attitudes and resources -- behind anti-LGBT legislation. But after a period of growth in numbers and political influence in the 1980s and 1990s, white fundamentalist Christians have seen the size of their congregations dwindle, eroding their political clout as well.

In October 2014, shortly before last year's mid-term elections, Robert Jones of the Public Religion Research Institute published a report in The Atlantic that summarized this decline and its political implications:

In recent years, for example, the Southern Baptist Convention, the largest evangelical denomination in the country, has reported steady declines in membership and new baptisms. Since 2007, the number of white evangelical Protestants nationwide has slipped from 22 percent in 2007 to 18 percent today ... A look at generational differences demonstrates that this is only the beginnings of a major shift away from a robust white evangelical presence and influence in the country. While white evangelical Protestants constitute roughly three in 10 (29 percent) seniors (age 65 and older), they account for only one in 10 (10 percent) members of the Millennial generation (age 18-29).

Jones looked in-depth at five Southern states, distributed across the region, to chart this trend, and presented the results in this chart: 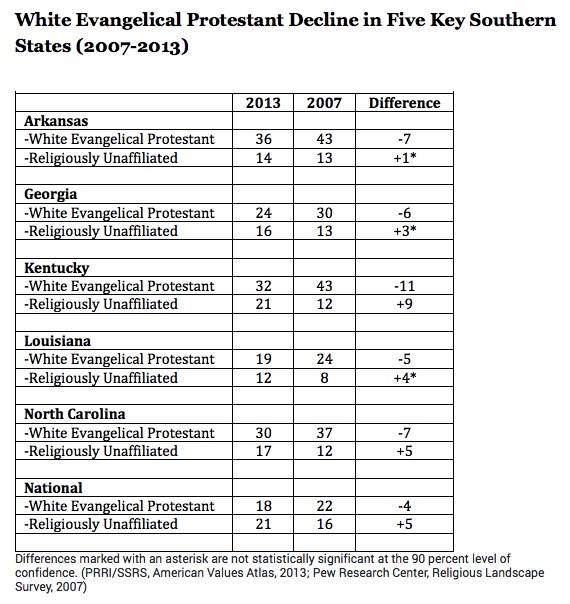 Jones sees the decline of white evangelicalism in the South and nationally as stemming from two sources: changing demographics, including new immigrant communities with different religious traditions, and a younger generation that increasingly identifies as "unaffiliated" when asked about their relationship to organized religion.

That doesn't mean that white evangelical faith is extinct in the South; far from it. And due to successful efforts to build religious-right organizations over the last three decades, white Christian conservatives are still a well-organized force in the electorate. But if current trends continue, white conservative Protestants are destined to be a less formidable feature of the Southern political landscape in the years to come.

Why NC's 'religious freedom' bill is worse than Indiana's