(For a larger version of the graphic, click here.)

A measure that may come before the North Carolina legislature this session could bring to light millions of dollars in political spending that is now often disclosed days or weeks after TV or radio ads air or political mailers are sent out — and in some cases, even after the elections they seek to influence have taken place.

Due to a loophole in North Carolina law, some outside political groups — those that are not affiliated with a candidate and spend independently to influence elections — are not required to disclose their spending until after an election. According to current disclosure rules, these "registered" political committees, whose primary purpose is to support or oppose candidates for office, only need to report expenditures on a quarterly schedule during election years. Consequently, information about who paid for many television and radio ads aired and mailers distributed before last November's state-level elections and how much they paid was not disclosed until January of this year.

In 2013 a bill that would have tightened disclosure requirements for outside groups, H918, passed the state House with wide, bipartisan support in a vote of 97 to 16 but then stalled. Had it passed, a Facing South/Institute for Southern Studies analysis finds, more than $7.1 million in outside election spending in 2014 would have been disclosed earlier, 71 percent of the nearly $10.1 million in total outside spending in the state.

Of that amount, $1.6 million would have been disclosed before the 2014 elections if the loophole had been closed. Instead, spending information was kept hidden until after voting had ended, making it difficult for the public to know what special interests were seeking to influence North Carolina elections.

Democratic and Republican lawmakers, along with state elections officials, appear to agree that the loophole undermines transparency about the interests that are seeking to influence elections. In 2013, Rep. David Lewis — now a seventh-term Republican from Dunn, N.C. — told the Carolina Journal, "The current reporting schedule is not meaningful." Lewis introduced the 2013 bill, titled "Electioneering and IE Reporting Changes," along with Democratic co-sponsors Rep. Paul Luebke of Durham and former Rep. Deborah Ross of Raleigh.

In addition to closing the loophole that slows disclosure for registered committees, Rep. Lewis' H918 bill also proposed a uniform reporting schedule that would have required all groups to disclose their first $1,000 of independent expenditures within 48 hours of the expense, and each successive $5,000 within 48 hours, at any time during the year.

In the current legislative session, there isn't a bill up for consideration that's similar to H918. However, the bill's disclosure provisions may still work their way into a House elections omnibus bill, which will address a host of elections-related issues.

The N.C. State Board of Elections has publicly supported increased disclosure laws in the past and was reportedly an advocate for H918. In an email to Facing South, Executive Director Kim Westbrook Strach wrote, "Meaningful and timely campaign finance disclosure is essential to ensuring that voters are fully informed."

In all, 23 groups disclosed independent expenditures later than they would have if the disclosure changes included in H918 had been in effect for the 2014 elections, the Facing South/Institute for Southern Studies analysis finds. Among the groups whose election spending reports were delayed in the absence of disclosure reform:

* Justice for All N.C., a conservative super PAC based in Raleigh, spent $899,000 on an attack ad opposing N.C. Supreme Court candidate Robin Hudson during the 2014 primary. Due to the loophole for registered committees, the group didn't file its spending report with the State Board of Elections until mid-July, over two months after the May 6 election.

* The N.C. Republican Party disclosed over $630,000 in independent spending in January of this year, months after the November elections the group was seeking to influence. Almost all of its $1.9 million in 2014 independent expenditures — 498 expenditures affecting 68 races — would have been disclosed earlier under H918.

* N.C. Families First, a liberal super PAC based in Raleigh, spent nearly $2.3 million on political expenditures in 2014, the most of any outside group. Over $780,000 of that would have been disclosed earlier under H918, although all of it was reported before Election Day.

* N.C. Citizens for Freedom in Education IE PAC, an independent expenditure group promoting private school vouchers and charter school expansion, disclosed in January 2015 more than $100,000 worth of independent expenditures that were incurred before the general election. Nearly all of the group's $311,000 spending total would have been disclosed earlier under H918.

Despite the broad effects of a change in disclosure rules like those included in H918, such measures wouldn't be able to fix all of the problems found in current expenditure reports, such as late or incorrect filing. The effectiveness of new disclosure rules also hinges on the oversight and enforcement capacity of the N.C. State Board of Elections, as well as clearer rules about how groups should classify expenditures.

For example, a Facing South/Institute for Southern Studies analysis found that eight groups together spent $273,000 on expenditures that were reported as having been paid for after the elections, although they purchased communications that clearly happened before the elections they intended to influence.

Below is a table detailing the outside spending in North Carolina's 2014 state elections, including the money that would have been disclosed earlier under H918. 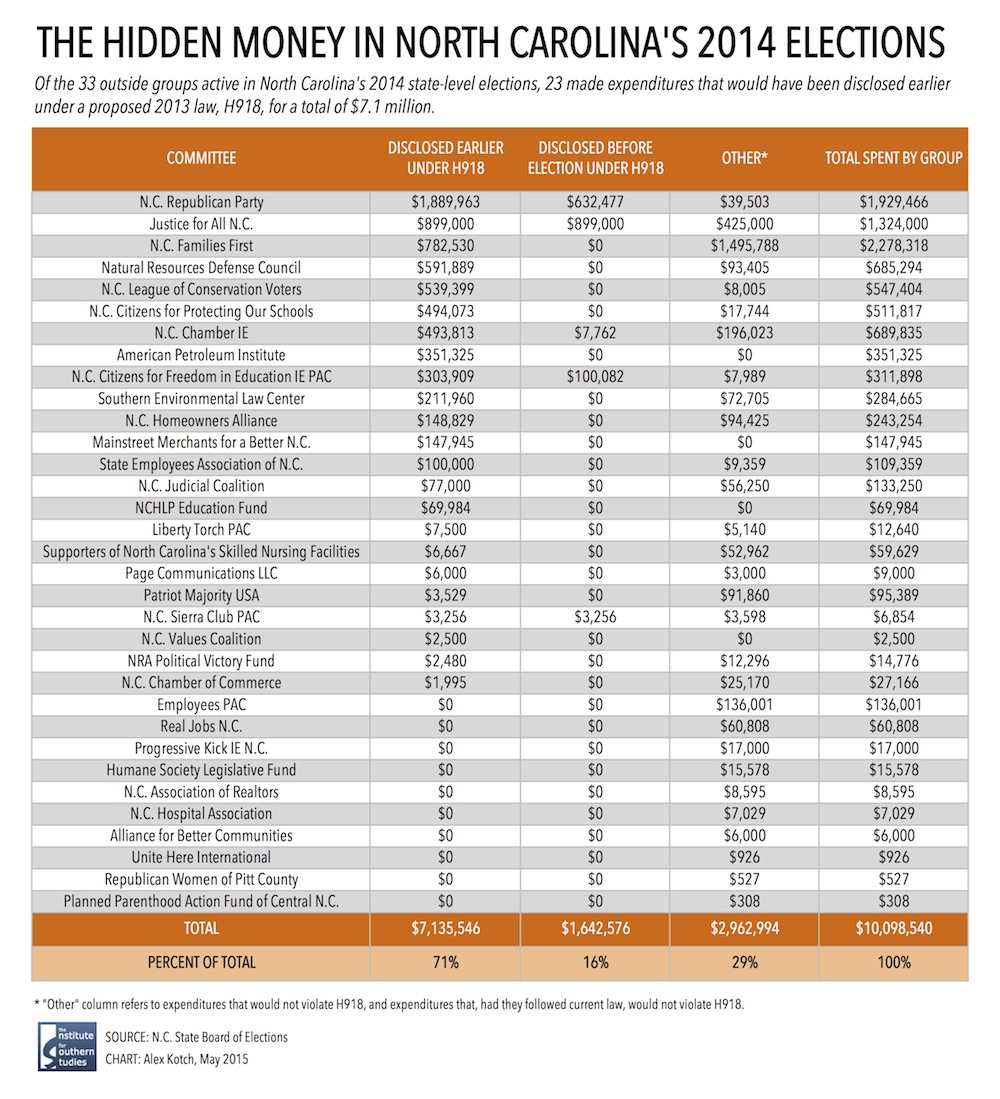